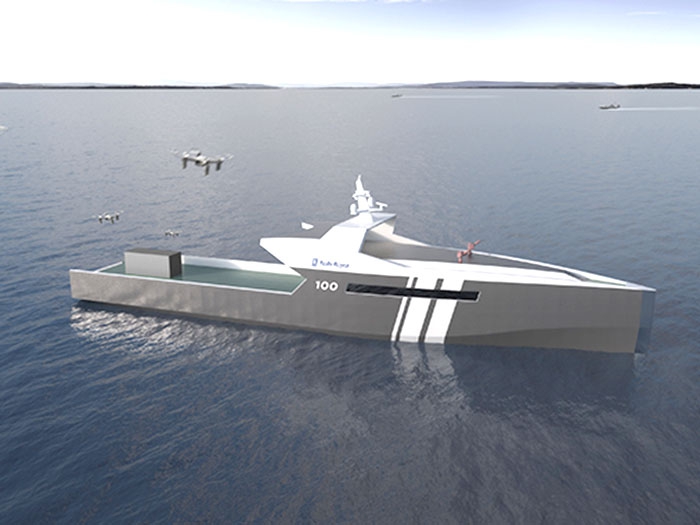 SEPTEMBER 12, 2017 — Rolls-Royce has unveiled plans for an autonomous, single role naval vessel. Capable of operating beyond the horizon for more than 100 days, with a range of 3,500 nautical miles, the 60 m vessel will displace 700 tonnes and reach speeds above 25 knots. It could be used for coastal patrol and surveillance, logistics support, or as part of a fleet deployment, protecting conventional manned warships.

With pressure on defense budgets, navies see unmanned technology as a route to reducing the through-life costs associated with crew. The removal of manpower from ships radically changes the ship design. Many of the habitation systems and accommodation compartments are removed, bringing immediate cost savings and making the vessel smaller.

The absence of crew increases the need for very reliable power and propulsion systems. Rolls-Royce’s approach is to blend advanced Intelligent Asset Management and system redundancy in a cost-effective manner that avoids sacrificing the cost and volume savings achieved by removing the crew. A suite of autonomous support tools, developed by Rolls-Royce, such as Energy Management, Equipment Health Monitoring and predictive and remote maintenance, will ensure the availability of unmanned vessels.

“The operational profile of these platforms will be more complicated than commercial unmanned vessels,” says Thorp. “They will be expected to sail from A to B on patrol, avoiding ships and other navigational hazards. At some point between A and B, they will detect something, maybe a submarine, and the mission will change to tracking and surveillance. The power and propulsion system will then need to adopt an ultra-quiet mode to avoid detection.”

These added complexities differentiate naval autonomy from commercial and highlight the challenges. Many of the technologies needed to make autonomous ships a reality already exist. Rolls-Royce has created what it believes to be the world’s first Intelligent Awareness System, combining multiple sensors with Artificial Intelligence, to help commercial vessels operate more safely and efficiently. Significant analysis of potential cyber risks is also being undertaken to ensure end-to-end security.

Rolls-Royce is looking to build on its reputation for robust and reliable naval propulsion systems to produce the open architecture autonomous solution required for the power and propulsion system. It will then seek partners to interface this with the naval navigation mission autonomous control systems. It expects to see the introduction of medium-sized unmanned platforms over the next 10 years or so, particularly in leading navies, with the concept of mixed manned and unmanned fleets developing.

The autonomous platforms are likely to cover a range of single role missions, while the larger manned ships will cover the multi-role missions. By mixing the fleet composition in this way, navies will reap the operational and cost benefits offered by autonomous technology.

Rolls-Royce is investigating the concepts of adaptability and modularity of the autonomous propulsion system to create a multi-mission platform. The vessel could then be used as a launch pad for Unmanned Aerial Vehicles (UAVs) in one mission and then as a submarine detection platform in the next. Should a hazard be detected at any time, the vessel’s mission could switch to tracking and surveillance.

The diesel engines could be replaced with small gas turbines, further improving the system’s reliability and reducing onboard maintenance.

Permanent magnet Azipull thrusters together with a bow-mounted tunnel thruster will make the vessel highly maneuverable.

To reduce fuel consumption and extend operational range, an additional 3,000 kWh of energy storage will facilitate efficient low-speed loiter operations and the vessel will also be fitted with photovoltaic solar panels to generate power when the vessel is on standby.

Rolls-Royce says it should also be noted that autonomy doesn’t necessarily mean removing all of the crew from the vessels completely. Autonomous technology presents an opportunity to automate certain parts of the ship’s operations, but not everything.