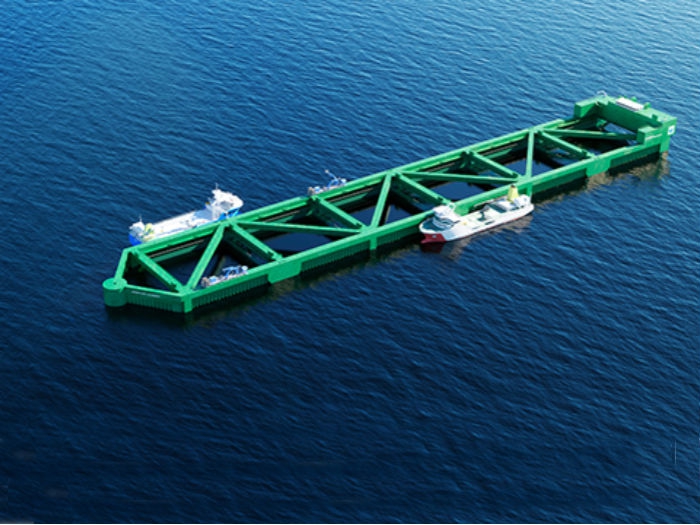 AUGUST 28, 2018 — Founded in 1989, Norway’s Nordlaks produces, processes, and sells high quality Atlantic salmon and Rainbow trout worldwide. This past February, Nordlaks signed a contract with China’s CIMC Raffles shipyard for the construction of Havfarm, a 385m long and 60m wide offshore salmon farm. Nordlaks says it is the first of two planned Havfarms. The first stationary Havfarm will be located in a sea area southwest of Hadseløya in Nordland in Norway, an area that up until now has been impossible to utilize for aquaculture.

Alongside other measures such as shorter production time in the sea and smarter use of the traditional fish farms, the Havfarm is how Nordlaks contributes to solving the area and environmental challenges that have been a constraint on the development of the aquaculture industry in Norway.

Nordlaks is also investing in a new hybrid/LNG live fish carrier (wellboat), which it has ordered from Tersan shipyard in Turkey.

Rolls-Royce reports that it has been commissioned to provide equipment for both the Havfarm and the live fish carrier, which have been designed by NSK Ship Design.

Rolls-Royce will supply six TT1100 tunnel thrusters to the massive fish farm, which has been designed to produce salmon further offshore than has been possible so far. The thrusters will be used to circulate water both inside and underneath the cages in which the fish stocks are held.

Ottar Ristesund, Rolls-Royce, SVP Propulsion Sales – Marine, says, “This is the first time we will be supplying thrusters for this kind of use. Normally, they are used for ship propulsion, so it is fascinating to see that our technology is being applied in new areas. It’s good that the maritime industry can join forces with fish farmers to think innovatively and help Norway harvest food from the sea using new and sustainable methods.

Nordlaks new, environment friendly wellboat will be used to transport live salmon from the offshore fish farm to the onshore processing facility. The wellboat will be fitted with four LNG engines, as well as propulsion and Dynamic Positioning (DP) system from Rolls-Royce. Capable of carrying over 600 tonnes of live salmon, the wellboat will substantially increase Nordlaks’s transport capacity.

“By choosing a hybrid solution that includes our well-proven Bergen gas engines and the energy-efficient Promas propeller system, Nordlaks and NSK Ship Design have taken a long-term perspective with regard to both environmental and financial performance,” says Ristesund.

“In addition, they have specified a propeller solution that provides the best possible maneuverability – whether the vessel is serving traditional fish farms in Norway’s fjords or the new installations located in rougher waters offshore. Combined with the DP system, this means the vessel produces low emissions and will run efficiently for many years. We are pleased that Nordlaks has chosen Rolls-Royce Marine in connection with both these exciting projects, and will do our best to ensure they are a success for the client and the two shipyards concerned.”