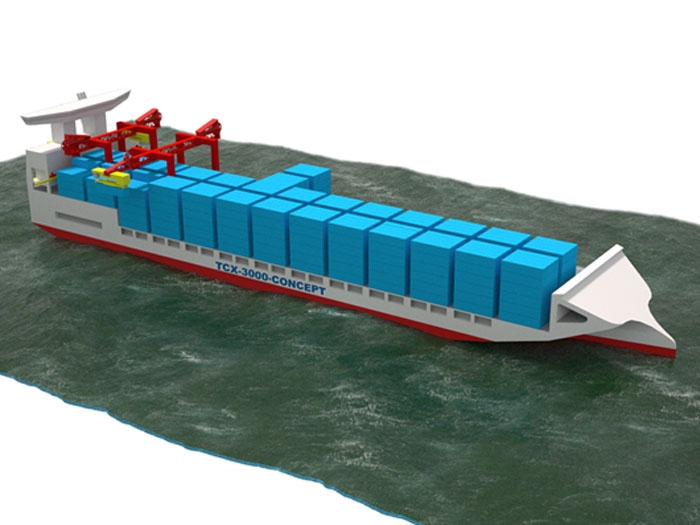 APRIL 5, 2016 – Danish naval architect company Knud E. Hansen has been developing a number of pioneering container feeder vessel designs. Each presents a series of innovations as part of a solution tailored to specific requirements.

The first in the series of three designs is a 2,000 TEU vessel conceived designed to calling at small, narrow, up-river ports. Navigating such harbors requires a vessel to have a shallow draft – in the case of Bangkok, Thailand, for example not more than 8.2 m. This means the vessel requires a relatively small diameter propeller.

To cater for this without a loss of power, Knud E. Hansen’s designers presented a special propeller arrangement employing a directly driven main propeller with a diameter of 5.8 m and a counter-rotating Azipod with a 4.7 m propeller.

Jesper Kanstrup, Senior Naval Architect at  Knud E. Hansen explains: “The dual arrangement makes up for the relative small diameter of the propellers. The total propeller disk area of the two propellers corresponds to the area of a single propeller with a diameter of approx. 7.4 m and further, the counter-rotating propeller will recover some of the swirl energy produced by the main propeller, which increases the overall efficiency.”

A second design foresees a vessel which does not require such a shallow draft and with  a 3,800 TEU capacity. With draft not a primary consideration, this design sees the feeder vessel fitted with a larger diameter, slower-turning propeller.

“With the large propeller we get a propulsion efficiency which is not that far from the efficiency of a counter-rotating solution, but for a much lower cost,” says Mr. Kanstrup.

Unlike most feeder vessels, the deckhouse of this vessel is positioned slightly forward of amidships to maximize the number of container slots on deck considering the IMO requirements to the line of vision from the bridge. The added number of slots can be utilized in real-life loading conditions because the vessel is wider and has a higher stability than most feeder vessels of this size. This arrangement has additional benefits.

“This prepares the vessel for LNG and dual-fuel propulsion – attributes that are becoming increasingly sought after,” says Mr. Kanstrup. “Here, we have a square block below the deckhouse, in which we can either have HFO tanks or LNG tanks. What’s more, the vessel can be built with HFO tanks and easily retrofitted for LNG the day the infrastructure for LNG is sufficiently developed if a dual-fuel engine is installed in the first place.”

The sketch below shows how the vessel can be converted.

The design is being developed in consultation with DNVGL with the aim of achieving an Approval in Principle; something that Mr. Kanstrup says will help make the design easier to market.

The third arrangement sees the application of an innovative hull shape suited for carriage of both partial and full container loads.

The problem arises due to the differing ways in which a vessel behaves based upon its load. A large container vessel, when carrying few containers, offers shallow draft, but has so much stability that accelerations are too high, causing problems for the lashing gear and the crew.

“In this situation, you don’t want anything more than sufficient stability and so a narrow hull is preferable,” says Mr. Kanstrup. “The problem being that, when you come to carrying a full load you require a wider water line for additional stability. So the ideal hull would have inclined hull sides with narrow water lines at shallow draught and wider water lines at deeper draughts, which, however, is not the most practical design considering the vertical quays in ports.”

The solution proposed by  Knud E. Hansenis that instead of a conventional hull (sketch A below) you take a hull with inclined sides (B), but mirror the triangular sections in each side (C) to create a trimaran or in better words a “stabilized mono-hull” with a narrow main hull with vertical sides and outrigger hulls with a triangular cross section, but vertical sides towards the quay (D).

This way you have the narrowness associated with low accelerations at partial load, and with the triangular section of the outrigger hulls, increased stability for full loads at deeper draught. The design features an open top section in the main hull, with 40ft containers stacked in a fixed cell guide system. Because cell guides are not fitted outboard the main hull above the outriggers, the loading flexibility with regard to carrying 20, 45 and 48 ft containers has been addressed.

“Many have proposed an open top container vessel, but to prevent water from being shipped over the sides of the vessel and into the open holds when the vessel is rolling in bad weather, the hull depth must be very high. And with a deep hull, the handling time for the containers will be increased because of the increased vertical traveling distance,” says Mr. Kanstrup.

This vessel answers that problem. Because the main hull is narrow, the sides of the open-top holds can be lower, and with lower sides, faster container handling.

When the vessel is not heeling, the sides barely touch the surface of the water, meaning little resistance. This ensures a vessel which can have a relatively high service speed while maintaining a reasonable fuel consumption per container, per nautical mile.

“We were looking for something that answers the slow steaming problem,” says Mr.Kanstrup. “With the advent of slow steaming, for certain goods, air freight has become a more popular choice as the cargo arrives faster. And moving goods from sea transport to air freight does not have a positive effect on the CO2 emission. With a design such as this we have a vessel that could bridge the gap between slow steaming container ships and air freight.”