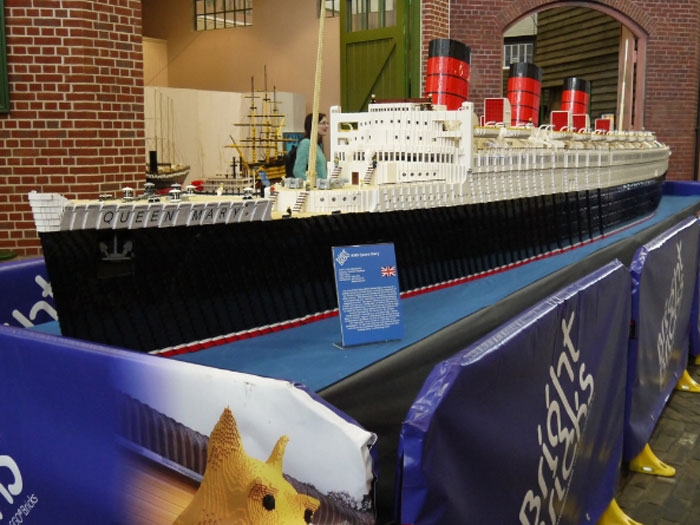 JUNE 19, 2015 — A Lego brick model of the Queen Mary that’s now on display on the iconic ocean liner in the Port of Long Beach is the world’s largest Lego model of a ship.

When Britain’s certified Lego builders, Bright Bricks, decided to commemorate the ship, they never dreamed the huge model would someday come to Long Beach and be displayed on the actual Queen Mary.

“Companies from around the world hire us to interpret their products or brand using Lego bricks,” said Bright Bricks co-founder, Ed Diment. “But, in this case, we decided to build the Queen Mary for our own satisfaction. It required four professional builders and over 250,000 individual Lego bricks. It took almost four months to complete the project.”

“The agreement to display our model on the ship is the perfect end to a wonderful Lego adventure,” he added.

“I can’t wait to see the look on the faces of the children who come to the exhibit and are confronted by this magnificent Lego brick model. And for those tall enough; some children might notice a tiny top-hatted mini-figure of Sir Winston Churchill walking the upper deck,” said Queen Mary General Manager John Jenkins.

To better connect children and others with the historical persona of the Queen Mary, the decision was made to display the model in an exclusive space – The Shipyard – and to surround it with Bright Brick building stations where children and Lego-enthusiasts can make their own version of the ship or anything else that comes to mind. The model room will feature four building tables and will be supervised by Queen Mary staff.

The Queen Mary herself is 1,019.4 ft long. While the Lego model is not on that league, in Lego terms it boasts some impressive statistics:

The Lego company certifies only a few official model makers; Bright Bricks is located in England and is a well-established creative resource. It is home to Duncan Titmarsh, the U.K.’s only Lego Certified Professional, and one of only 16 in the world.