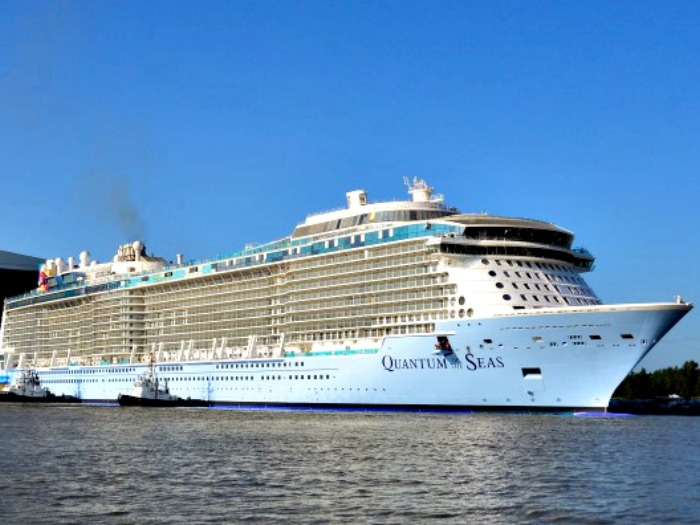 AUGUST 18, 2014—Longer than three U.S. football fields, the 167,000 gross ton, 4,188-passenger  Quantum of the Seas was recently floated out at the Papenburg, Germany shipyard of Meyer Werft.

Scheduled to make its debut out of its homeport of New York City later this year, Royal Caribbean’s Quantum of the Seas is scheduled for delivery by October 2014. The ship not only features some of the latest environmental technologies along with enhanced energy efficiency, but also incorporates a range of innovative entertainment features that passengers will enjoy when the ship starts sailing to Bermuda, the Bahamas and the Caribbean.

One of them is the North Star, an observation capsule modeled on the giant London Eye wheel. A thrilling 90 meters above deck, the North Star provides passenger with a spectacular bird’s eye view of the ocean.

At the stern of the ship is the “Two70°” lounge and bar with a dance floor by day while serving as a performance venue in the evening. The name of the lounge refers to the 270 degree view that it affords to guests through its large glass panels. These are also used as projection surfaces during the evening shows.

Another innovation is the “SeaPlex,” a multifunctional room in which passengers can pass the time with a wide choice of activities, including riding bumper cars and playing basketball. There is also a “RipCord by iFly” simulator, which promises authentic sensations of taking part in an actual parachute jump. Even the inside cabins have an attraction of their own—they are fitted with 82 inch television screens, which serve as virtual balconies with real-time images of the sea, offering the same view as the outside cabins.