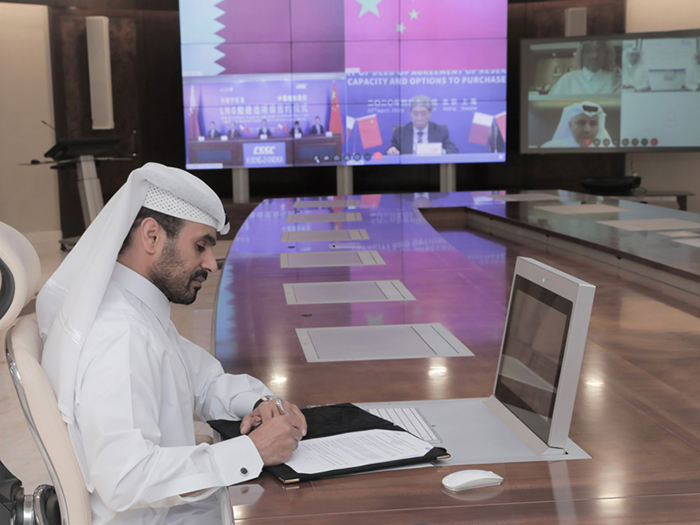 Agreement was signed on Qatar’s behalf by Saad Sherida Al-Kaabi, Minister of State for Energy Affairs and President and CEO of Qatar Petroleum.[Image: Qatar Petroleum]

Qatar Petroleum has entered into an agreement to reserve LNG ship construction capacity in China to be utilized for its future LNG carrier fleet requirements, including those of its ongoing North Field expansion projects.

The agreement was formalized in a virtual signing ceremony between Qatar Petroleum and Hudong-Zhonghua Shipbuilding Group Co., Ltd. (Hudong), a wholly owned subsidiary of China State Shipbuilding Corporation Limited (CSSC) and covers the potential construction of a significant number of 174,000 cu. m LNG carriers of CSSC design customized for Qatar

Under the agreement, a large portion of Hudong’s LNG ship construction capacity will be reserved for Qatar Petroleum through the year 2027.

The agreement was signed by Saad Sherida Al-Kaabi, Qatar’s Minister of State for Energy Affairs, who is also President and CEO of Qatar Petroleum, and Mr. Lei Fanpei, the Chairman of CSSC, in a virtual ceremony held today in the presence of Sheikh Khalid Bin Khalifa Al Thani, CEO of Qatargas, and Mr. Chen Jianliang, Chairman of Hudong, as well as senior executives from Qatar Petroleum, Qatargas, CSSC and Hudong.

According to Minister Al-Kaabi, the agreement “has the potential to be well in excess of 11 billion Qatari Riyals [about $3 billion], depending on our requirements and the extent of China’s LNG shipbuilding capacity expansion. To this end, Qatar Petroleum is pleased and proud to support the expansion of the LNG ship construction capacity in China and looks forward to further growth in the near future.”

Although the Qatar Petroleum announcement did not disclose the number of ships involved, some news sources are placing the total at 16. Be that as it may, CCSC called the slot reservation agreement “the largest shipbuilding export order undertaken by Chinese shipbuilding companies to date.”

According to CSSC, the LNG ship type in the contracted project is a new “G4 + Changhui” series LNG ship of 174,000 cubic meters capacity, independently developed and designed by Hudong Zhonghua, offering greater cargo capacity and lower energy consumption than the previous generation of LNG carriers. The North Field expansion projects will increase Qatar’s LNG production capacity from 77 million tons per annum to 126 million tons per annum. Qatar Petroleum’s LNG carrier fleet program is the largest of its kind in the history of the LNG industry and will play a pivotal role in meeting the shipping requirements of Qatar Petroleum’s local and international LNG projects, as well as replacing some of Qatar’s existing LNG fleet.