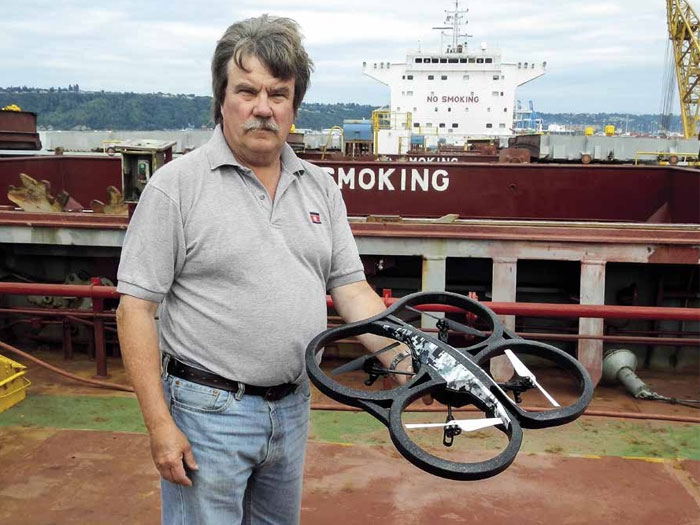 Port captain Jan Andersen with his small video camera-equipped drone. The photo was taken in Vancouver, Canada, when the cargo holds of the Panamax dry cargo ship Ecomar Go were being inspected before the ship was loaded with sulfur for a customer in Kwinana, Australia

The cargo holds on Norden’s dry cargo ships are gigantic, and the remnants of previous cargoes can lie concealed in a myriad nooks and crannies. However, all of these remnants must be removed before the next cargo can be loaded, so a cargo hold inspection leaves no stone unturned. Normally, ladders or even hoists are required to establish that the cargo holds have been adequately cleaned, a process that is arduous, time-consuming, costly and sometimes also dangerous. However, says a story in the latest issue of Norden News, the drone cheaply and safely speeds up the search for cargo remnants and thus the overall cargo hold inspection time before the next loading.

Port captains often only have a time window from late afternoon to early next morning to examine a cargo hold, so time is of the essence and Jan Andersen has found that his drone can cut that time in half.

It takes the drone 20 seconds to access any part of the cargo hold, while rigging a ladder or a hoist takes a long time.

“I have used the drone particularly for examining cargo holds before loading grain in Canada,” says Captain Andersen.

In such cases, it is quite normal for the customers’ inspectors, who must also check the actual cleanliness of the hold, to arrive with long ladders and climbing equipment. It takes time and can be dangerous.

“The inspectors are enthusiastic about my drone and its tour of the cargo holds, because afterwards they can see the hold surfaces in close detail on their phone,” says Captain Andersen. “So although a few inspectors were initially skeptical about my drone — some even laughed at me — they have now realized that a drone with a video camera is an effective way of examining a hold on a dry cargo ship.”

Norden has nine port captains in various locations worldwide. Working closely with operators at Norden’s Hellerup head office and overseas, as well with ship  crews, their job is to ensure that things run smoothly when one of company’s roughly 200 dry cargo ships calls at a port. Their responsibilities include the cleaning and examining of cargo holds and handling matters such as documents, defective loading or discharging equipment, incorrect port bookings and cultural differences — or some other issue entirely.

Norden says that experience shows that the port captains can handle anything, including the unforeseen, which  is how they help create value for Norden  — usually following the motto: The time best spent is time spent on preventing problems.

Captain Andersen says he got the idea of using a drone to examine cargo holds for old cargo remains because it is a cheap, fast and effective inspection method. Previously, he had experimented with a small remote-controlled helicopter, but its rotor blades collided all too easily with the sides of the cargo hold, resulting in crashes. The drone is a different story, because, with its small protected rotor blades, it can fly close to the cargo hold sides without mishap.

“Our customers’ inspectors are so excited about my drone that some are actually disappointed if I do not bring it to inspect the holds. I take that as approval of my idea,” says Captain Andersen.

“Jan has had a really good idea that is basically tailor made for the type of inspections he carries out in his geographic area,” says Vice President Jens Christensen, Head of Operations at Norden’s head office, adding that Norden is currently investigating whether other port captains can benefit from the idea.

DRONES FOR INSPECTIONS: AN EMERGING TREND?

Earlier this month, we reported on how Poland’s Remontowa shipyard recently used a drone to inspect internal spaces in a 51,747 dwt chemical/product tanker. If you missed that story, you can read it HERE

If you have had experience in the use of drones in shipboard or shipyard applications, send your story to [email protected]