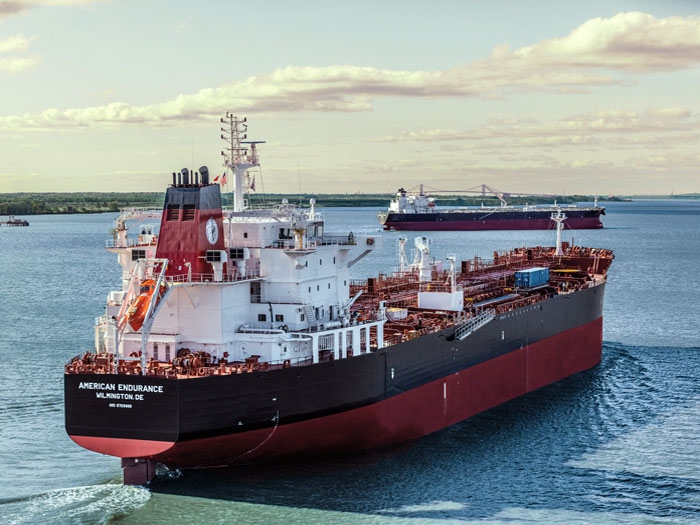 JANUARY 13, 2017—Keel layings have always been important milestones in a ship’s life. In a way, it signifies a vessel’s birth. While the keel no longer refers to the wooden “backbone” of a vessel in the era of steel-hulled ships, but usually a large module, one of the traditions that remains from the age of sail is the placement of coins under the keel. The tradition is supposed to bring the ship’s captain and crew luck during the vessel’s life.

Such a ceremony was recently held at Philly Shipyard, Inc. (PSI), the wholly-owned U.S. subsidiary of Philly Shipyard ASA (Oslo: PHLY), for the fourth vessel in a series of four 50,000 dwt LNG-ready product tankers for American Petroleum Tankers (APT), a Kinder Morgan, Inc. subsidiary. Representatives from Philly Shipyard and Morgan Kinder placed coins on one of the keel blocks before the 650-ton unit was lowered into place in the dry dock.

The keel laying ceremony follows on the heels of the delivery of the M/V American Endurance, the first ship in the series, last month.

Among those in attendance at the keel laying ceremony were the 15 new shipyard hires, who began orientation on January 9. This first orientation class of 2017 included 10 new apprentices, one transportation worker, one machine operator, one shipbuilder, and two interns.

At the ceremony, Steinar Nerbovik, Philly Shipyard’s President and CEO, remarked, “Within the last 17 years of building great ships, we’ve also built great teams and a best in class workforce. The shipyard is a place where you can be a part of something big, and we are always looking for additional skilled men and women to join our family.”

When completed, the 50,000 dwt product tanker will be 600 feet long and carry crude oil or refined petroleum products. The product tanker is based on a proven Hyundai Mipo Dockyards (HMD) design, which incorporates numerous fuel efficiency features, flexible cargo capability and the latest regulatory requirements. The LNG-ready tanker will be constructed with consideration for the use of LNG for propulsion in the future.

Philly Shipyard has delivered 25 ships in its 17-year history, including the American Endurance, the first product tanker for APT in December 2016. The three remaining product tankers for APT are currently under construction and have planned deliveries throughout 2017. Also under construction at the shipyard are two 3,600-TEU containerships for Matson Navigation Company, Inc., with planned deliveries in the third quarter of 2018 and first quarter of 2019.