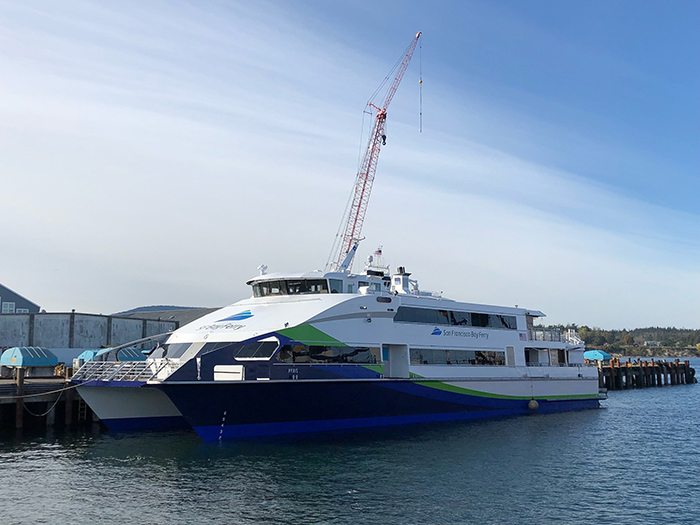 Pyxis in the water at shipbuilder Dakota Creek Industries

Pyxis is the first of three vessels in its class under construction for WETA by shipbuilder Dakota Creek Industries in Anacortes, Washington.

MTU Tier IV engines and HamiltonJet waterjet propulsion give them a 34 knot speed.

Sister ships Lyra and Vela are expected to be delivered within the next year. Those vessels will augment WETA’s North Bay (Vallejo and Richmond) ferry services. WETA’s fleet now has 14 ferries.

Pyxis is the fifth new ferry WETA has added to its San Francisco Bay Ferry fleet since 2017. Carina, a 400-passenger ferry, entered service in February 2019. Hydrus, Cetus and Argo – all also 400-passenger ferries – joined the fleet in 2017 and 2018.

“Vallejo ferry passengers are going to love riding Pyxis,” said Nina Rannells, WETA’s executive director. “Our ridership has doubled since 2012, and we are working to grow our fleet to accommodate this growth. Pyxis is perfectly suited for Vallejo service with the highest passenger capacity in our fleet and a 34-knot speed.”