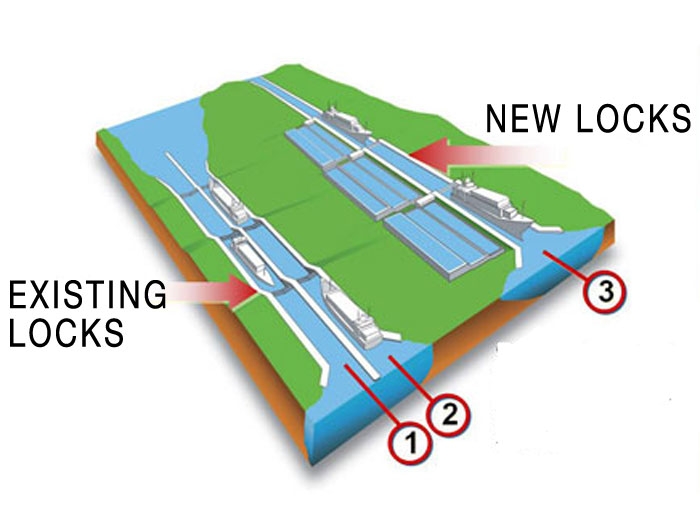 Consortium building third set of locks has run out of money

FEBRUARY 6, 2014 — All those post-Panamax ships that shipowners have been ordering may not be able to pass through an expanded Panama Canal as early as projected. There has been a breakdown in negotiations between the Panama Canal Authority (ACP) and Grupo Unidos por el Canal (GUPC), the consortium building the third set of locks key to the canal expansion project. Zurich Insurance, which is providing a $600 million security bond for the project, reportedly estimates that expansion will be delayed by 3-5 years without an agreement.

GUPC says that unexpected geological conditions and other problems mean that it needs another $1.6 billion to complete its contract. Now, essentially, ACP appears to be saying, “suck it up and honor your contract” with GUPC responding, “Can’t, no money.”

GUPC says it continues to “seek a solution for funding the completion of the project” (translation:get more money) but says that ACP broke off negotiations.

Yesterday, ACP said that it demanded that GUPC resume work on the project as required by the contract and that “after two weeks of negotiations, which saw production levels drop to 25%, almost all activity has ceased.”

Canal Administrator Jorge Quijano said that ACP continues to try to find a solution, but stressed that the contractor must resume normal activity which is especially crucial during the dry season in Panama.

“ACP continues to keep the door open for a reasonable resolution within the contract,” Mr. Quijano said.

GUPC, which includes Sacyr (Spain), Salini-Impregilo (Italy), Jan De Nul (Belgium) and Constructora Urbana (Panama) said that ACP had broken negotiations and that this puts the Panama Canal expansion and up to 10,000 jobs at immediate risk.

“Without an immediate resolution,” says GUPC, “Panama and the ACP face years of disputes before national and international tribunals over their steps that have pushed the project to the brink of failure.”

GUPC has completed more than 70% of the project despite, it says, hardships and financial losses.

Here’s an extract from a statement it issued yesterday:

“GUPC has been making proposals and responding to proposals on an almost continual daily basis. GUPC continued to make efforts yesterday on the last proposal sent to ACP to reach agreement and allow completion of the expansion project in the shortest time possible.

“GUPC supplemented its latest proposal and ongoing communications with ACP by sending a letter to ACP Administrator Jorge Quijano inviting the ACP to abandon its unreasonably rigid position and join GUPC in reaching a solution that allows the completion of the project in conformity with applicable contracts and laws. GUPC also reiterated the importance of receiving payment from ACP on a pending $50 million invoice discussed in recent meetings, to allow payments to subcontractors and workers in order to cover this week’s payroll. While there has been no response, GUPC continues to seek a comprehensive solution.”

“Unforeseen geological conditions, for instance, have had a significant impact on costs related to civil works, requiring the use of extensive additional resources to progress the works keeping excellent quality standards and the highest respect of the environment in the Canal Zone. GUPC has been transparent and subjected the project to external audits.

“The project is already more than 70% complete and the specialized Lock Gates will all be delivered in 2014. It requires additional funding of $1.6 billion to reach completion. This is a burden of such a magnitude that no contractor or private company can bear alone.

“A funding plan is required to permit the completion of the works. GUPC and ACP have been focused on how to fund the additional costs through a co-financing arrangement in order to allow the completion of the project, while the parties arbitrate their disputes as to whose responsibility the overruns are.

“The funding is separate from the resolution of the ongoing disputes by DAB/Arbitration awards to determine the ultimate liability for under the contract and applicable laws.

“The circumstances require a balanced solution, reached in good faith, to pre-finance the $1.6 billion in costs necessary to complete the project, and separately provide time for international arbitration proceedings to allocate the ultimate liability for those costs under the Contract and applicable law.”