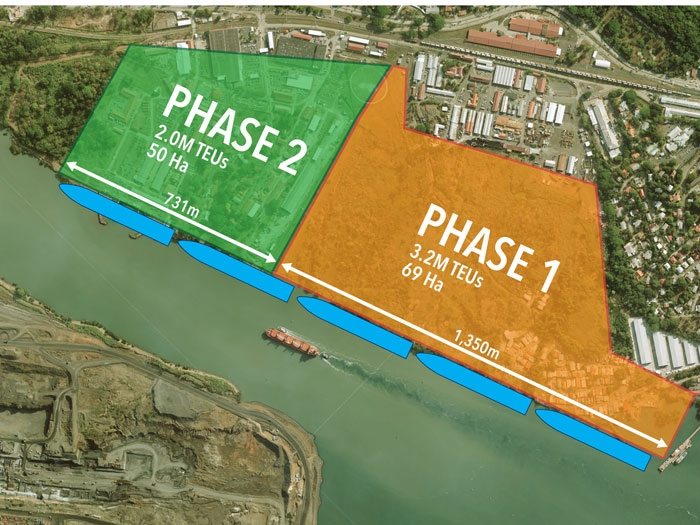 DECEMBER 31, 2014 —  The Panama Canal Board of Directors this week formally approved the development and construction of a transshipment port in Panama’s Corozal region.  Upon completion, the port will have the capacity to handle more than five million TEUs within a 120-hectare area at the Canal’s entrance to the Pacific. The project is now awaiting the final step for approval from Panama’s National Assembly.

The two-phased port project will include the construction of a 2,081-linear-meter-dock, a container yard, offices and warehouse facilities within a 120-hectare area owned by the Panama Canal. The project’s first phase will include 1,350 linear meters of docks, three docking positions for Post-Panamax ships, and an approximate handling capacity of three million TEUs. Currently, the Pacific side has an estimated capacity of five million TEUs. With the Expanded Canal, demand on the Pacific side is expected to reach six million TEUs and by 2020, eight million TEU capacity.

The new port terminal will also include the construction of port facilities capable of handling Post-Panamax vessels. With a terminal of 16.3-meter-deep access canal and a depth of 18 meters along the dock, the new facility will provide docking facilities for five Post-Panamax ships.

The National Assembly is expected to review the bill in the coming days. If approved, the Panama Canal will move forward with the development and tender process.

The project is expected to create hundreds of new jobs during its construction phase, boosting the local economy. The Panama Canal will issue a call for bids to hire a company that will be responsible for all stages of the project. The contract will, most likely, consist of a 20-year concession, renewable once for 20 years.

“Advancing the terminal in the Corozal region is a priority. It is part of the Panama Canal’s goal to explore and develop areas, products and services that are close to our core business, and that add substantial value to our customers as a one-stop gateway with multiple services,” said Panama Canal Administrator/CEO Jorge Luis Quijano. “This new facility will result in a significant increase in inter-oceanic cargo traffic, enabling the Canal to add value to the route and customers, consolidating Panama’s position as an international logistics and maritime hub.”

According to Mr. Quijano, the port may well increase Canal tonnage, given the close linkage between the Canal and the new port.