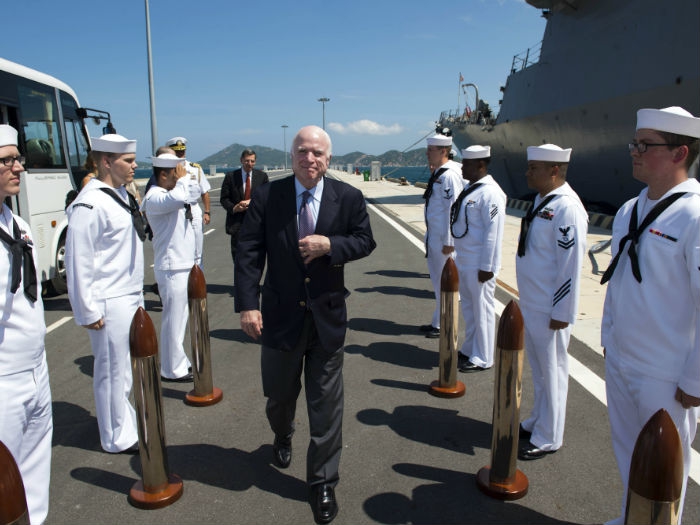 AUGUST 27, 2018 — There was an outpouring of admiration and affection for Arizona Senator John S. McCain III, following his passing on August 25 after a long battle with terminal brain cancer. Often labeled a “maverick,” the Senator, a naval aviator during the Vietnam War, prisoner of war in the “Hanoi Hilton” for five years, and Presidential candidate, was 81.

Secretary of the Navy Richard V. Spencer said in a statement,“Today, the Navy and Marine Corps team lost a friend and one of our own when Senator John McCain passed.

“From the Naval Academy to flight school and throughout his time as a prisoner of war in Vietnam, McCain displayed unfailing honor and duty to country. If that was the end of his service, he would still be renowned as a hero, but McCain’s desire to serve didn’t stop when his uniform came off. He continued to serve as a representative and senator from Arizona. Throughout his life, McCain never ceased serving our nation or fighting for what he believed.

“My heartfelt condolences go out to the McCain family, their friends and loved ones. Everyone on the Navy and Marine Corps team shares this loss with all who had the fortune of knowing Sen. John McCain.”

The late Senator also drew praise from Chief of Naval Operations Adm. John Richardson, who said: “The nation has lost a great patriot and warrior. Whenever we were in a tough spot, we knew Sen. McCain would be on our side with his characteristic toughness and integrity. The U.S. Navy mourns the loss of a true shipmate. Our prayers go with him and to his family, that they find consolation. May Sen. John McCain, who never flinched from a worthy fight, rest in a well-deserved peace.”

The Senator’s father and grandfather both rose to the rank of Admiral in the Navy. A legacy that was noted by CMDR Micah Murphy, current Commanding Officer of the USS John S. McCain (DDG-56).

Said CMDR Murphy: “On behalf of the crew of USS John S. McCain, I offer our support and prayers to the McCain family, our gratitude to the senator for his years of service to our nation, and a heartfelt traditional Navy sendoff: ‘Fair winds and following seas.’ It is an honor to have our mighty warship carry on your name and continue your legacy.”

Sen. McCain continued this proud legacy as a naval aviator during the Vietnam War. As a prisoner of war, he endured more than five years of captivity, representing America honorably and selflessly.

After retiring from the Navy, he continued national service in Congress, first as a representative and later as a senator from Arizona. Sen. McCain took an active interest in the destroyer and its crew, including a visit to the ship during a port visit to Cam Ranh International Port in Vietnam on June 2, 2017. The ship had visited ports in Vietnam several times before over the years in honor of the McCain legacy.