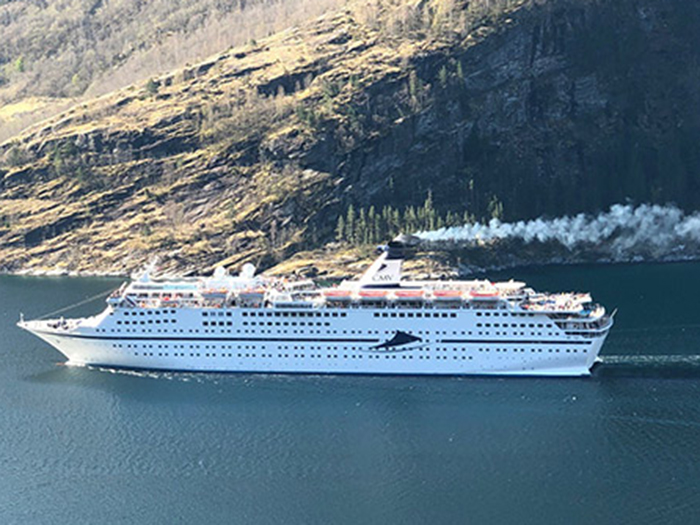 MS Magellan on its way to one of the world heritage fjords, Geiranderfjord (Photo: Norwegian Maritime Authority)

The Norwegian Maritime Authority (NMA) has hit a Greek owned cruise ship that violated new sulfur emissions limits with with a NOK 700,000 ($80,000) fine. The ship, the MS Magellan, is operated by the Greek company Global Cruise Lines Ltd.

The fine is the first imposed under new environmental requirements for emissions and discharges that came into effect March 1 and cover the world heritage fjords Nærøyfjord, Aurlandsfjord, Geirangerfjord, Sunnylvsfjord and Tafjord

On April 16, the NMA received notes of concern about smoke emissions from the Bahamas-registered Magellan, which was berthed in Flåm. These were followed up by an inspection on board when the ship arrived at Geiranger the next day. The NMA surveyors measured the sulfur content of the ship’s fuel to be 0.17 %.  In the world heritage fjords, the maximum allowed sulfur content is 0.10 %.

Tracking of the vessel’s AIS signal shows that it made ports of call at both Eidfjord and Flåm in the days preceding the port of call at Geiranger. Both of these ports are located within the North Sea ECA. The ship came to Eidfjord from Tilbury in the U.K., where it left port on April 13.

“Our documentation shows that the ship has entered two world heritage fjords with sulfur values far beyond the legal limit values,” says Bjørn Pedersen, Head of Department of Legislation and International Relations in the NMA.

NMA says the violation by the Magellan is significant as the ship had sailed a considerable distance within the emission control area using a fuel with an excessive sulfur content. It says that the fact that the new rules concerning the world heritage fjords were violated is an aggravating factor.

“Overall,” says NMA, “this implies that violation fines at a historic high level be imposed on the company.”

NMA is putting a focus on inspection of ships, particularly cruise ships, in the world heritage fjords.

“Even though many cruise ship companies have invested in new, modern ships, the world heritage fjords are still being visited by many older ships,” says NMA, adding that ithas a clear expectation that the new legislation will be complied with.

“We will have an increased presence in the world heritage fjords in the months to come, and our focus will be on making sure that the new environmental requirements are met,” says Alf Tore Sørheim, Head of Department of Operative Supervision. “The NMA has made efforts to ensure safe and effective controls of sulfur emissions. Our surveyors are equipped with handheld devices that provide an immediate indication of whether the vessel satisfies the requirements or not. Moreover, we have invested in sensors which can be attached to a drone to detect sulfurous exhaust gases.”