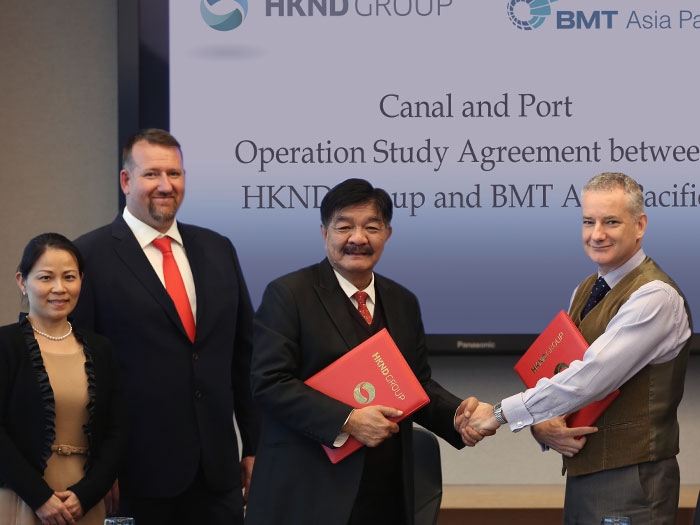 BMT Asia Pacific and BMT ARGOSS will assist the development and validation of the planned canal's design and operations through a structured framework.

"Our study will seek to articulate a solution that minimizes canal excavation while ensuring adequate canal capacity and safety," says Dr. Richard D Colwill, Managing Director, BMT Asia Pacific. "A crucial part of that solution involves sophisticated navigation and transport simulation, which will set the basis for identifying a design that balances excavation CAPEX with operational safety, efficiency and capacity."

BMT's proprietary simulator, REMBRANDT, is widely recognised by the shipping sector for its accurate and detailed recreations of the navigation environment. Its What You See Is What You Get (WYSIWYG) output provides a platform that helps engineers and mariners  investigate different design geometries.

"Through REMBRANDT BMT will provide early and decisive insight on potential marine constraints, enabling us to identify appropriate mitigation and optimization measures - be it physical or operational in nature," says Captain Paul Morter of BMT ARGOSS.

Besides carrying out operational assessments, BMT will also update the business case for the canal's Pacific and Caribbean ocean ports. BMT will use its experience in port masterplanning and port strategy to help HKND identify the ports' potential competitive positioning.

"The Nicaragua Canal system will see a large variety of vessels and wide range of vessel movements along the canal, within the inland ports, and between canal, port and ocean approaches," says HKND Executive Director K.W. Pang."These activities occur with differing metocean conditions, transit speeds/directions, and transit modes, etc. Recognizing this complexity, we are seeking to access BMT's global network of subject matter experts to assemble a highly capable, technical team to address the canal's marine safety and traffic challenges from all angles."

DECEMBER 9, 2015 – Hong Kong Nicaragua Canal Development Group (HKND) has hired two BMT Group companies to help it in its plans for development of the 259.4 km Nicaragua Grand Canal, capable of handling ships even larger than those to be accommodated by the expanded Panama Canal.