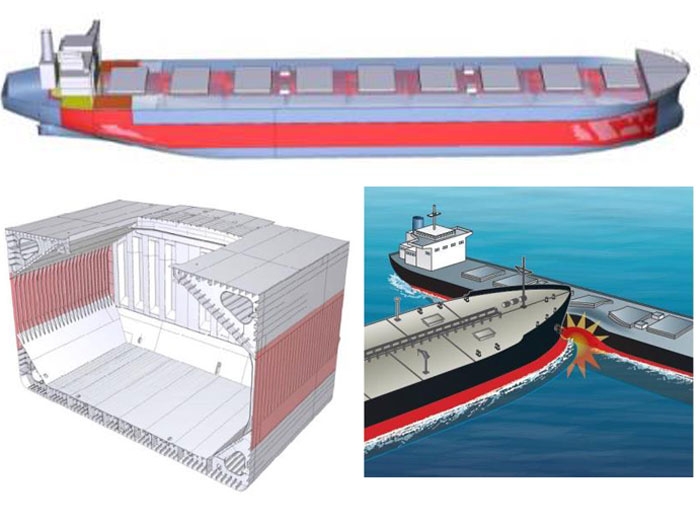 Top and left: areas where NSafe Hull was used. Right: Side impact collision

While maintaining the workability (e.g., machinability and weldability) of conventional steels, the superior ductility of the material means that, in a side collision, the energy absorbed before a hull fracture is suffered is roughly three times that of a ship made of conventional steel.

NSafe Hull was developed by Nippon Steel & Sumitomo Metal Corporation and adopted through collaborative R&D that also involved Imabari Shipbuilding and the NMRI.

The 3,000 tons of NSafe-Hull in the just-launched bulker has been used for structural parts where high collision safety performance is required, such as the side plates of cargo holds and fuel tanks.

NMRI says that use of the material co contributes to preventing oil leakage resulting in environmental pollution and ingress of water into cargo holds, which directly leads to cargo damage and may even lead to a capsize.

Further advanced analysis is planned to be conducted with the support of ClassNK’s “Joint R&D with Industries and Academic Partners” scheme. ClassNK is, in addition, considering assigning notations to ships with higher safety, such as those in which NSafe Hull is used.