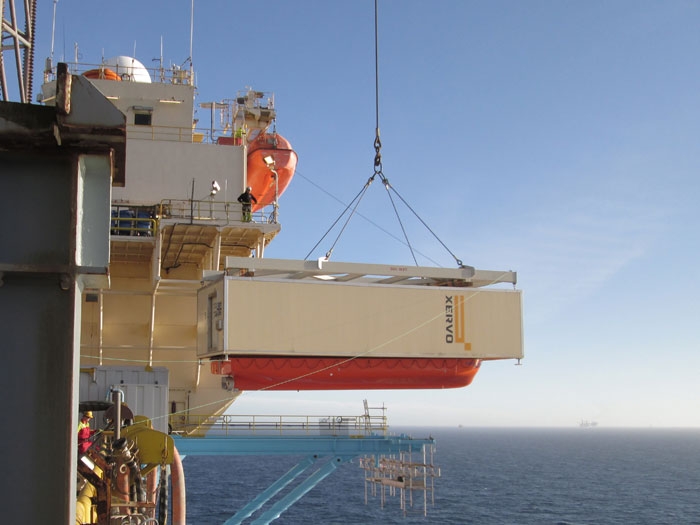 Boat-in-a-box being installed on Maersk Innovator

Since its delivery in 2003, Maersk Innovator has worked in the Norwegian sector of the North Sea. In the coming years, safety equipment on many rigs in the Norwegian sector will need to be replaced. To meet this  need, Xervo has developed new methods and solutions for the cost-effective retrofitting of lifeboats and rescue boats.

The two Xervo Boat-in-a-Box lifeboat systems were installed on Maersk Innovator without even a single work stoppage.

“A lot of money can be saved by avoiding operational shutdowns,” says Ahmed Abou Chawk, Senior Business Manager at Xervo. “We have thought out new ways to make lifeboat systems ready and carry out the required commissioning tests while the rig is operating. On the Maersk Innovator the process was planned down to the last detail in co-operation with the staff on the rig, and that meant we could carry out the installation without any unforeseen obstacles.”

In preparation for the project, a workshop session was held onshore for the personnel involved. During the workshop, the installation was gone through step-by-step with the participation of both the customer and all suppliers. That meant that all areas of responsibility and all procedures – from delivery to installation to commissioning on the Maersk Innovator – were clearly understood by all involved.

“It’s a special challenge to carry out an offshore retrofit of this size while the rig is operating, because that creates some major logistical demands,” says Mr. Chawk.  “That’s why we came up with several creative solutions – for example, a flexible installation procedure, where lifting operations were tested and optimized on land. The interfacing on board the rig and the commissioning tests also got a dry run at Xervo before the actual installation.”

Xervo says its Boat-In-a-Box is a plug andplay solution that is extremely simple to mount. The system’s four legs are simply welded on the outer side of the rig. After six cables are hooked up, the lifeboat system is fully functional.

“We have put a lot of development effort into making everything as simple as possible,” says Mr. Chawk. “It’s all about evaluating the risk and the costs and minimizing the probability that something can go wrong. We also take the approach with all of our projects that we need to learn from every process and develop even smarter solutions for the next project.  That means that in a very short time, we’ve been able to consolidate as a turn-key supplier of lifeboat and rescue boat systems. We are fully aware that costs and in particular the risk of lost earnings is an all-important competitive parameter.  But we have significantly minimized that risk with our solution model, so that replacement of lifeboats and rescue boats can be carried out on an absolutely competitive economic level.”