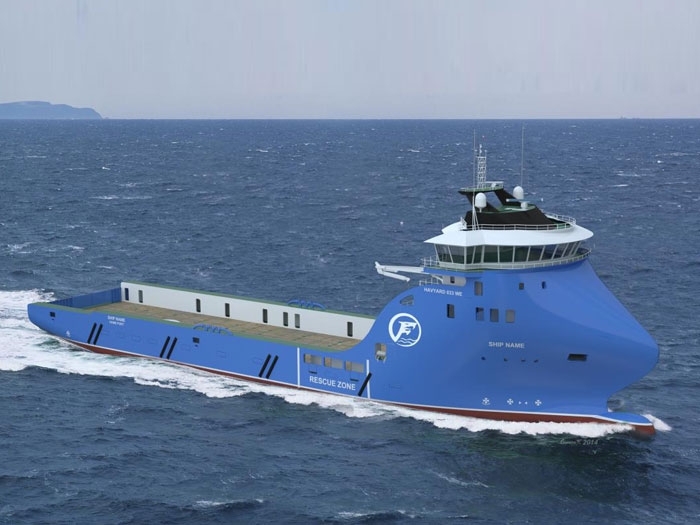 MAY 7, 2014 — Norwegian Electric Systems (NES), Bergen, Norway, is to supply the hybrid battery diesel electric propulsion system for the Arctic PSV recently ordered at Havyard by Iceland’s Fafnir Offshore (see earlier story) for July 2015 delivery. The vessel will be built at Havyard Ship Technology shipyard in Leirvik in Sogn, Norway, with the hull being supplied by a Turkish shipbuilder.

This is the second time NES has supplied a diesel electric propulsion system for Fafnir Offshore, but this time its QUEST (Quadro Energy Storage Technology) system is included.

The QUEST-1 and 2 are two different energy storage systems. The average curve shown in the diagram below indicates that the system can be run with one diesel genset, and when more power is needed (green area) it is supplied from the batteries. In the red area, the batteries can be charged with the spare power from the gensets.

NES says that the QUEST system will open a new era in the electrical propulsion market. NES has extended the development of the Quadro Drive, thus far, with a QUEST-1 solution where the DC/DC converter is incorporated in the Quadro Drive. This means there is no need to decentralize the battery banks. Battery room space can be saved on any design or vessel, for example near to the main switchboard room, and choose QUEST-1 or QUEST-2.

NES has, through its software development, been able to study various vessels, monitoring their fuel and power demand. Using this knowledge it has established the necessary criteria to calculate the average level of power and any subsequent boosting power required from the battery. (See illustration below for QUEST-1 and QUEST-2, demonstrating the power to and from the batteries. Green curves indicating boosting and red curves indicating charging).

A diesel electric system can give fuel savings from 15-50% depending on mode. With the QUEST system, says NES, an additional fuel savings of up to 15% can be gained, with, says NES

NEC says its philosophy has always been to prepare all its diesel electric and hybrid electric systems with modular “add on” capability. It says it has studied the DC grid system as a possibililty, but found it to be “based on yesterdays technology” and “far too expensive, especially installation wise.”

The company says that its Quadro Drive has been proven to be a leading diesel electric system with more than 22 systems already in operation offering superb quality and true reliability.

With the new QUEST systems NES says it can add many new advantages to the Quadro Drive, including