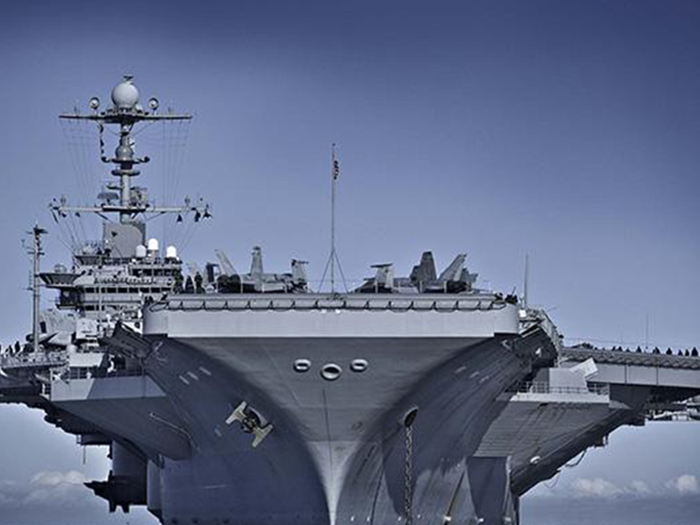 The U.S. Navy would prefer that its ships be just one shade of gray. Now, a pigment package designed by the U.S. Naval Research Laboratory (NRL) to slow discoloration of the exterior coating on surface ships has started to make its way into the fleet and is producing early, positive results.

NRL researchers created the pigment combination to satisfy the fleet requirement for the Navy standard “haze gray” paint that will remain color stable for longer than current coatings. While many paint manufacturers had produced new coating technologies that solved a variety of other problems, such as corrosion and delamination, some ships still showed discoloration in as little as 18 months. Additionally, different coatings from different manufacturers fade to different hues, resulting in an inconsistent appearance between the original coatings and any in-service touch-ups or repairs.

“We had a good idea on how to solve the issue, and we leveled the playing field by providing the pigment combination to all companies at the same time,” said Dr. Erick Iezzi, senior research chemist in the Center for Corrosion Science and Engineering at NRL.

NRL is currently working with Naval Sea Systems Command, Naval Systems Engineering Directorate, Ship Integrity & Performance Engineering (SEA 05P) to transition the new pigment combination into a military specification, which will become the standard for haze gray paint applied to surface ships. The first vessel to receive a coating with the pigment combination was USS Essex (LHD 2) in 2017. The most recent to vessel to receive it was USS George Washington (CVN 73).

While all paint manufacturers have access to the pigment technology, three companies have already started mass-producing the paint, generating an estimated tens of thousands of gallons thus far. Recently, Sherwin-Williams won the Society for Protective Coatings Military Coatings Project Award of Excellence for its new top coat paint that incorporates the new pigment after it was used to overhaul USS George Washington.

“It was motivating to know that several companies were willing to lean on our expertise to provide a new technology that would produce the best product for the Navy,” lezzi said.

From 2012 to 2013, Iezzi worked with corrosion science researchers Jimmy Tagert and Candice Langaster to design five new pigment combinations and test them for color stability, solar reflectance and other coating properties. After testing all combinations, they provided the best performing combination to paint and coating manufacturers to begin integration in 2015.

“It was great working with the manufacturers and demonstrating our ability to provide a product needed for the fleet,” Tagert said.