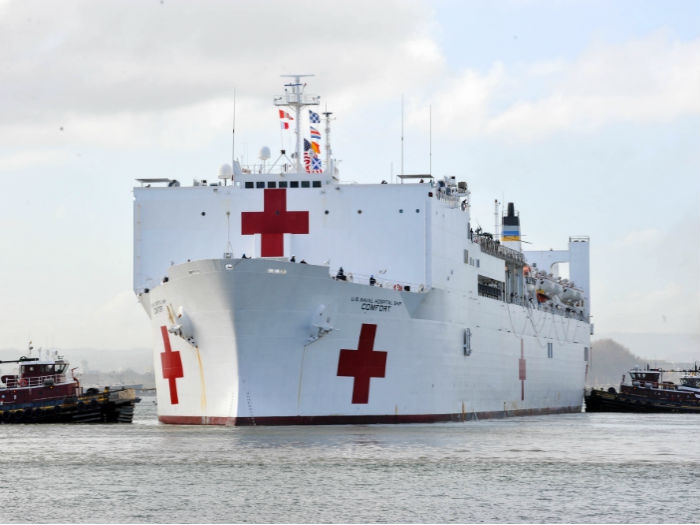 On October 4, five critical patients were medevaced by Navy helicopters to hospital ship from Ryder Memorial Hospital in Humacao, Puerto Rico, after the hospital’s generator failed.

Hospitals in Puerto Rico are still operating on generator power and have been plagued by failures.

“The hospitals are still in crisis,” Dr. Ubaldo Santiago, Director of Emergency Services for several San Juan hospitals and clinics told NBC News. “Many are still working on generators. It’s tough, and the doctors are giving their maximum.”

NBC News reported that Dr. Santiago has had to evacuate the Hospital San Francisco in San Juan because of generator failures.

The possibility of hospitals in Puerto Rico failing due to running on emergency generators for extended lengths of time had been planned for by Comfort, the Federal Emergency Management System (FEMA) and other U.S. government and local agencies. The ship is operated by the Navy’s Military Sealift Command (MSC).

“Working with the Army and the Hospital, we were able to reduce transport times for critically ill patients,” said Lt. Cmdr. Christopher “Harm” Perry, a dual-designated emergency physician and naval aviator aboard Comfort who landed the MH-60S with patients. “This is the mission we have all been training for.”

The Army Blackhawks, who are scheduled to conduct day landing qualifications on Comfort, transferred patients to the Sea Knights at a nearby landing zone in San Juan.

Comfort is part of the whole-of-government response effort and is assisting FEMA, the lead federal agency, in helping those affected by Hurricane Maria.

Comfort currently has more than 800 personnel embarked for the Puerto Rico relief effort, including Navy medical and support staff assembled from 22 commands, as well as over 70 civil service mariners.

The hospital ship has one of the largest trauma facilities in the United States and is equipped with four X-ray machines, one CT scan unit, a dental suite, an optometry lens laboratory, physical therapy center, pharmacy, angiography suite and two oxygen-producing plants.

While in San Juan, the hospital ship will host a summit with key stakeholders to synchronize efforts for the ship’s mission throughout the area.