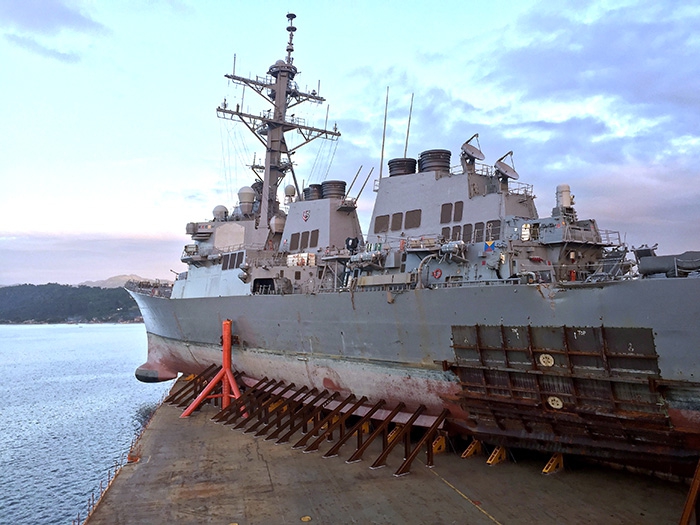 NOVEMBER 28, 2017 — After various delays, the Navy is getting back on track with its repair plans for the two Arleigh Burke-class guided missile destroyers involved in collisions with merchant ships that cost the lives of 17 sailors.

John S. McCain was diverted to Subic Bay Oct. 22 due to poor weather conditions and to repair cracks in the ship’s hull discovered after the ship departed Singapore aboard MV Treasure. While at anchor in Subic Bay, technicians inspected the cracks and determined the ship needed additional blocks under it to support and distribute its weight on the heavy lift vessel.

Upon arrival in Yokusuka, John S. McCain will be repaired at Ship Repair Facility-Japan Regional Maintenance Center (SRF-JRMC) before returning to service in U.S. Seventh Fleet.

“SRF is making preparations to begin remediation and repair efforts immediately once the ship is dockside,” said Lt. Cmdr. Sandra Wyman assigned to SRF-JRMC. “The project will be one of the largest SRF has undertaken.”

Fitzgerald returned to repair two punctures in her hull caused by the heavy lift vessel’s steel support structure during on load at anchorage. Repairs were expected to extend the on-load process by a few days, after which Transshelf will transport Fitzgerald to Huntington Ingalls Industries (HII) in Pascagoula, Mississippi for further repairs and upgrades.

Fitzgerald had been towed to deep water to begin the heavy lift process Nov. 24. In the months prior to her departure from Yokosuka, technicians and shipbuilders at Ship Repair Facility Yokosuka made significant progress in preparing the ship for the journey, including dewatering, defueling, hull and superstructure repairs, and placing key systems in layup maintenance. In October, she was moved from dry dock to a pierside location in anticipation of the move.