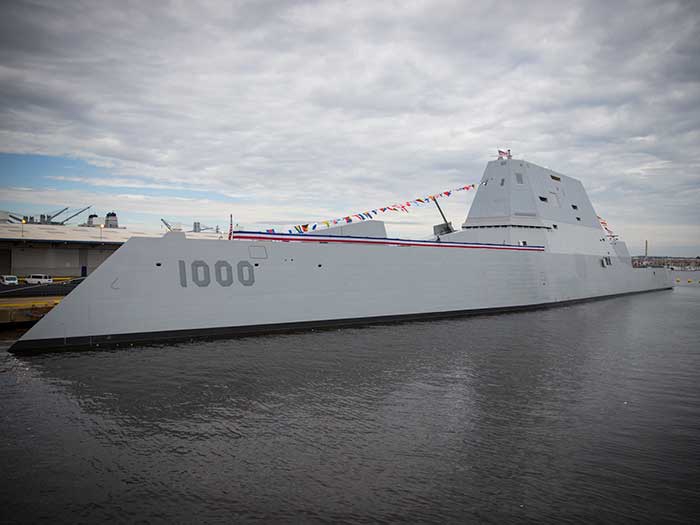 “This ship is an example of a larger initiative to increase operational stability and give the U.S. a strategic advantage,” said Secretary of the NavyRay Mabus. “Our Navy and our Marine Corps, uniquely, provide presence – around the globe, around the clock – ensuring stability, reassuring allies, deterring adversaries, and providing the nation’s leaders with options in times of crisis.”

The ship’s cosponsors, Ann Zumwalt and Mouzetta Zumwalt-Weathers, are daughters of former Chief of Naval Operations Adm. Elmo R. Zumwalt, Jr., after whom the ship is named. The sisters were an integral part of the ceremony, giving the order to “man our ship and bring her to life,” in keeping with naval tradition.

“Today’s ceremony marked the culmination of over three years of dedication and hard work by some of the finest Sailors I have had the pleasure to lead,” said Capt. James A. Kirk, commanding officer of Zumwalt. “The only thing more impressive than the capabilities of the ship are the capabilities of its fine crew.”

“This destroyer, like the others in our fleet, is capable of projecting power, no doubt,” said Mabus. “The Zumwalt-class is much larger than today’s destroyers with a considerably larger flight deck – enough space to operate host Joint Strike Fighters, MV-22 Ospreys, and unmanned systems and a Vertical Launch System second to none.”

In addition to its size, the Zumwalt class will be the first Navy warships to utilize an integrated power system that will produce enough power to run current systems, as well as the power required for future weapons, computing, and sensor systems. Zumwalt generates approximately 78 megawatts of power, almost as much as a nuclear-powered aircraft carrier. This means the ship can operate all of its systems and still generate enough electricity to power a small town, which provides the extra capacity to accommodate future weapons and computing systems.

Zumwalt is scheduled to begin her transit to San Diego, making several port visits along the way. Upon arrival in San Diego, USS Zumwalt will begin installation of her combat systems, testing and evaluation, and operational integration with the fleet.

Once fully integrated, Zumwalt’s stealth, power and lethality will provide a vital link from the Navy’s current needs to its future capabilities.