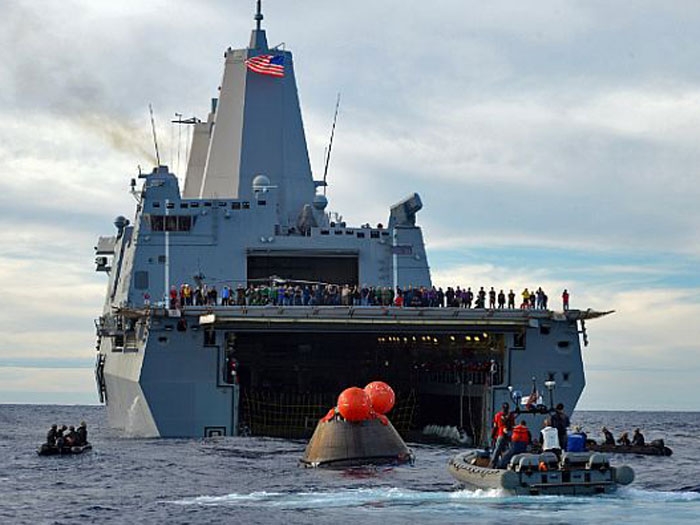 DECEMBER 15, 2014 — When NASA’s Orion spacecraft splashed down in the Pacific Ocean December 5 it had completed a two-orbit, 4.5 hour flight test that took it farther into space than any spacecraft built for humans has been in more than 40 years.

The recovery of  the reusable, unmanned  capsule by NASA, the U.S. Navy and Orion prime contractor Lockheed Martin was achieved by USS Anchorage (LPD 23), one of the last ships built at Avondale Shipyards. It marked the culmination of nearly three years of testing, evaluating, and platform integration performed by Naval Sea Systems Command (NAVSEA).

NASA, Fleet Forces, and NAVSEA first began discussions regarding the use of a welldeck ship – specifically one from the new, LPD-17-class – to retrieve test articles, such as Orion, in early 2012, which led to a series of Technical Interchange Meetings  to address the capabilities and challenges of such a mission.

The goal of the final URT “run phase” was to test the equipment and procedures up to the maximum design capabilities.

“Because of conditions experienced in the well[deck] during the recovery using LPD 22, modifications were required to the retrieval hardware and procedures to account for higher wave actions,” said Bob Ramsay, LPD In-Service Ship Design Manager. “As a result of the extensive testing and modifications, everything went per design.”

As the Navy’s lead engineering integration manager for the operation, NAVSEA’s “safe and adequate” validation allowed for the successful recovery and transport of the Exploration Flight Test vehicle.

“Our role was to provide technical support to [US] Fleet Forces [Command] and NASA for the interface to the welldeck and the communication systems of the ship as they developed their test program,” said Jay Stefany, Executive Director for Program Executive Office Ships. “We were an integral part from the technical support of their test program that led up to the actual successful recovery of this test vehicle.”

Launched from the Kennedy Space Center in Cape Canaveral, FL, the Orion Multi-Purpose Crew Vehicle (MPCV) is a beyond-low-earth-orbit spacecraft being built by Lockheed Martin for NASA based on designs and tests already completed as part of the cancelled Constellation Program.

Though unmanned for this most recent evolution, plans for the four-astronaut capsule include use for missions to the moon, asteroids, International Space Station and/or Mars.

The recent launch and recovery have been likened to Apollo in the 1970s, but unlike the Apollo recovery – also an ocean splashdown – Orion cannot be helicopter lifted because of its larger size, both in weight and diameter. Additionally, the extraction of astronauts to a medical facility requires a stable platform which a helicopter recovery method would not be able to support safely.