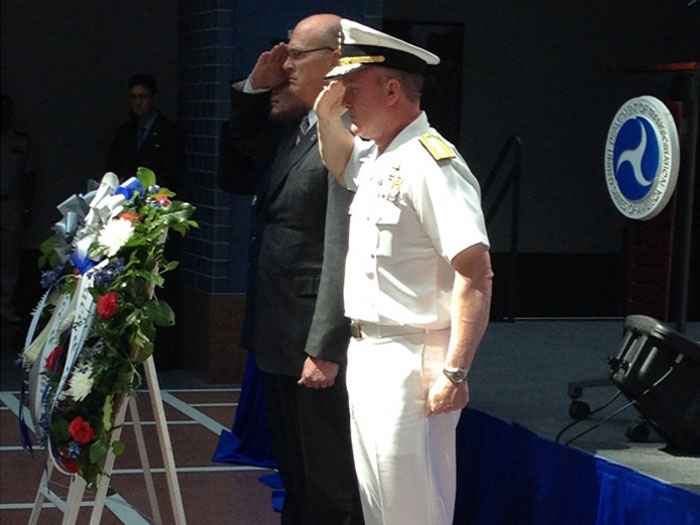 MAY 22, 2014—The 81st annual National Maritime Day was marked in ceremonies held by the U.S. Department of Transportation in Washington, D.C. National Maritime Day was created by Congress to recognize the maritime industry. May 22 was selected because it is the date in 1819 that the American steamship Savannah set sail from Savannah, GA, on the first ever transoceanic voyage under steam power.

“Just like members of our nation’s Armed Forces, many merchant mariners made the ultimate sacrifice for their country.  In accomplishing the global logistics effort to support our troops during World War II, the U.S. Merchant Marine had one of the highest casualty rates of any service.  Nearly one in 30 merchant mariners did not survive the conflict, including 142 midshipmen from the The U.S. Merchant Marine Academy.

“Today, the U.S. Merchant Marine continues to serve in support of the Department of Defense —delivering more than 90 percent of the cargo needed to support military operations and reconstruction efforts in both Iraq and Afghanistan.

While America’s merchant mariners remain vital to our national security, at the same time they continue to support our economy. During times of peace, merchant mariners have reliably crewed U.S.-Flag vessels to carry American imports and exports to and from our shores. With more than 75 percent of our international trade goods currently moving by water, merchant mariners are a fundamental facilitator of modern American life.

Through unceasing service, the U.S. Merchant Marine has enabled American prosperity and security for more than two centuries. On National Maritime Day, we recognize this critically important American asset, remember their sacrifice, and renew our commitment to the merchant mariners who have provided—and continue to provide—so much for our country.”