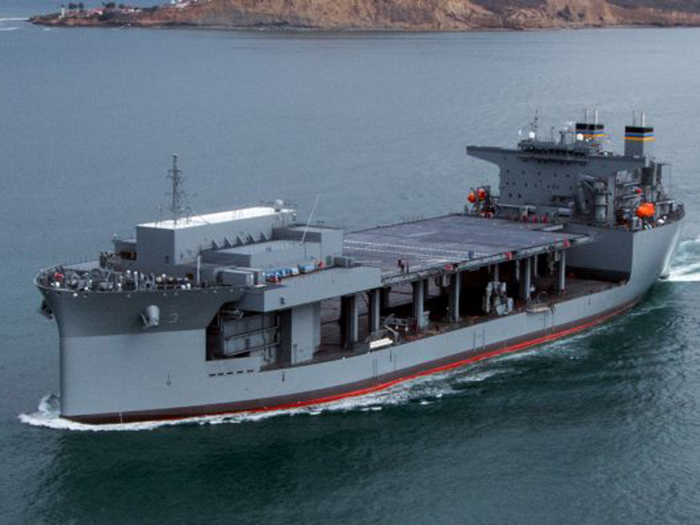 General Dynamics National Steel and Shipbuilding Co., San Diego, Calif., has been awarded a contract by the U.S. Navy worth up to $1.6 billion for the construction of the sixth and seventh ships of the Expeditionary Sea Base (ESB) program, as well as an option for ESB 8.

“We are pleased to be building ESB 6 and 7 for our Navy,” said Kevin Graney, president of General Dynamics NASSCO. “ESBs have proven to be affordable and flexible, and as the fleet has gained experience with the platform, we have worked with the Navy and Marines to develop even more capabilities and mission sets.”

The contract has provides $1.08 billion as a fixed-price-incentive modification to a previous contract for the design and construction of the two ships, with an option for the third that, if exercised, would bring the total cumulative value to $1.63 billion.

Named after famous names or places of historical significance to U.S. Marines, ESBs serve as a flexible platform and a key element in the Navy’s airborne mine countermeasures mission, with accommodations for up to 250 personnel and a large helicopter flight deck. The ship’s configuration supports special warfare and Marine Corps task-organized units.

Work on the two new ships of the ESB program is scheduled to begin in the first quarter of 2020 and continue to the second quarter of 2023, providing the opportunity to sustain and grow the workforce along San Diego’s working waterfront. General Dynamics says that NASSCO’s unique location along the historic San Diego Bay “provides shipbuilders and skilled tradespeople with unparalleled access to the nation’s leading maritime support businesses, and highly-trained employees allow NASSCO to build and repair some of the world’s greatest ships in the most efficient manner possible.”

In 2011, the Navy awarded NASSCO a contract to design and build the first two ships in the newly created MLP program, the USNS Montford Point and USNS John Glenn. The program expanded with three more vessels, the USS Lewis B. Puller, USNS Hershel “Woody” Williams and the Miguel Keith, configured as ESBs. Following the delivery of the first four ships to the U.S. Navy, the fifth ship, the Miguel Keith, is scheduled for delivery in the fourth quarter of 2019.