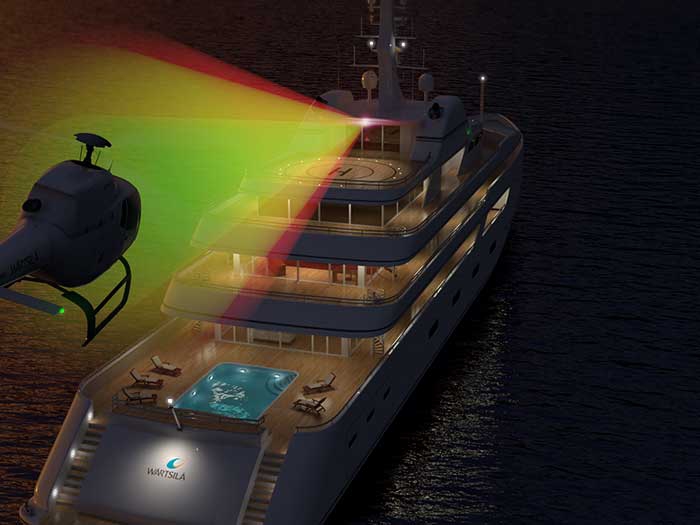 SEPTEMBER 27, 2016 — Your helicopter pilot will now be able to land the Dom Perignon on your yacht more safely.

Meeting market demand, notably in the mega yacht and cruise ship segments, the technology is based on the company’s well known Nacos Platinum navigation system.

The Helicopter Guidance “plug-in” tool adds a graphic overlay on electronic chart display & information systems (ECDIS) and radar, and shows at a glance whether or not the helicopter is making a correct approach along the right flight path.

The “Heli Guidance” feature can be operated and activated manually. To automate this tool, an optional direct connection to an onboard Helicopter Visual Landing Aid (HVLA) system can be provided. For the tracking of fast objects, this can be used in combination with Wärtsilä’s temporarily connectible High Speed Radar (HSC) function.

“Mega yachts often feature a helicopter landing area, which inevitably carries an increased risk of accidents, and which require the full attention of the captain and crew. Our novel Helicopter guidance tool is designed to enhance the safety of shipboard helicopter operations, and is an important addition to our technically advanced solutions vessel navigational aids,” says Stephan Kuhn, Vice President, Electrical & Automation, Wärtsilä Marine Solutions.

The Wärtsilä Nacos Platinum solution integrates all navigation and automation system controls into a single system that enables the vessel to be navigated, controlled, and monitored from various onboard positions. The multi-functional workstations provide combined displays of radar, ECDIS and conning information, as well as automatic steering and voyage planning operations.