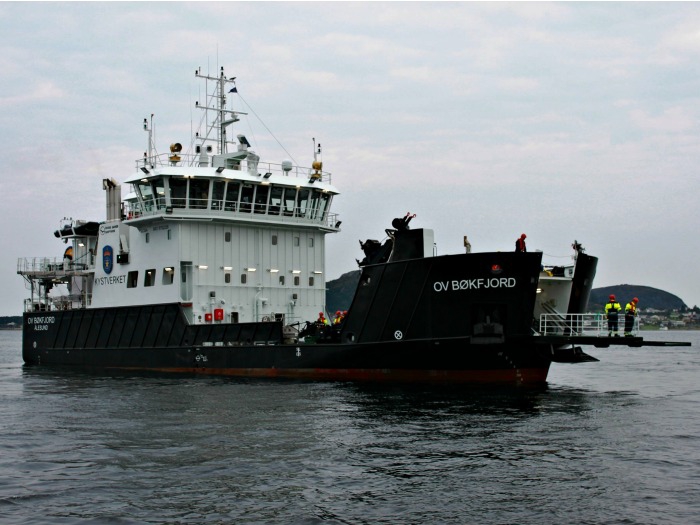 OCTOBER 26, 2016—Today at Danish Maritime Days in Copenhagen, Maritime Denmark named the multi-purpose vessel OV Bøkfjord as the Danish Ship of the Year 2016. The 44m vessel’s concept design was developed in close cooperation between Kystverket, Hvide Sande Shipyard and A/S Jørgen Petersen (ASJP) – now part of OSK, who has been responsible for development of the Basic Design.

OV Bøkfjord is multifunctional with the ability to operate as both a buoy and beacon maintenance vessel on a daily basis, as well as an oil recovery vessel for Kystverket in Norway.

It is designed for fast response time and fitted with specialized equipment, i.e. surface oil skimmers and dedicated holding tanks, etc. The vessel has an advanced diesel-electric hybrid propulsion system integrated into the vessel’s compact design.

“We are really proud to be part of the winning project again” says CEO of OSK Anders Ørgård and continues: “last year we won with Princess Isabella, Denmark’s first domestic LNG-powered passenger ferry, and the year before that the winner was Stavangerfjord of Fjord Line, where OSK was involved as Owner’s Advisor. This year the award is motivated for the complex design of this compact multi-purpose vessel. It just goes to show the wide span of our design capabilities.”

“Kystverket wanted a series of complex functionalities incorporated in one compact vessel design, so we’ve had to be quite creative in combining many functionalities in very limited space,” says Anders Ørgård. “We’ve developed a complex ramp system allowing the vessel to approach smaller islands and also to use the ramps for dynamic positioning during repairs at sea. These, as well as oil sweepers, holding tanks, offshore crane etc., have been integrated in the design whilst also making space for a battery pack, as Kystverket wanted the vessel to have diesel-electric hybrid propulsion.”

The vessel will be operating along the northern most shores of Norway and hence it is prepared for harsh environment coastal operations as well.

The award for the OV Bøkfjord underlines the long-term cooperation and great relationship between the yard, ASJP and now OSK-ShipTech.