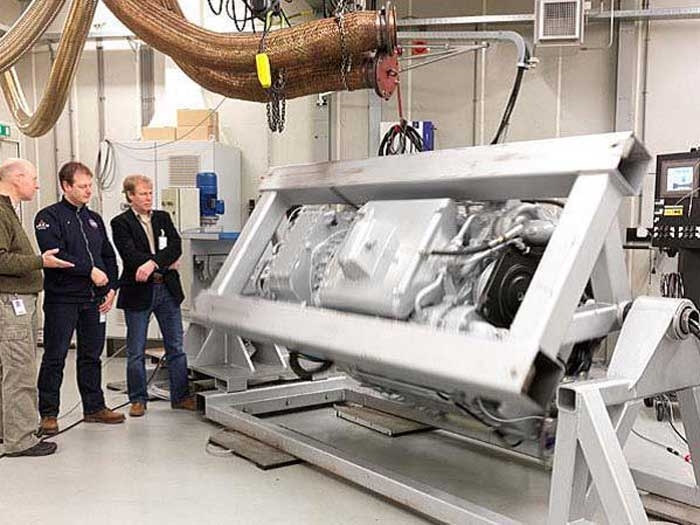 JULY 23, 2014 — Rescue vessels are designed to right themselves when overturned and it is  critical that the engines powering them be able to withstand the 360-degree rollover with no compromise to performance. In these situations, the durability and resilience of a marine engine can be the difference between a rescue or a recovery.

Following recent rigorous real-world simulation testing, the 8V 2000 M84L engine from MTU, a subsidiary of Rolls-Royce Power Systems, kept running after rotating 360-degrees on its own axis, proving that the cutting-edge engine, specifically optimized for commercial marine applications, can endure the roughest seas.

“We had to demonstrate that the MTU Series 2000 engine was capable of rotating fully around its own longitudinal axis while idling, without suffering any negative effects,” said  Wouter Hoek, marine sales team leader, MTU Benelux. “Including preparation, the whole test took two days. It was crucial that we were able to use a rollover stand that was capable of realistically simulating a genuine lateral rollover.”

The engine was tested in Dordrecht, Holland at MTU Benelux and testing will continue through the remainder of this year. The MTU Benelux facility began developing the engine more than two years ago to meet the specialized needs of the Royal Netherlands Sea Rescue Institution (KNRM).

When rescue vessels capsize, engine oil can get into the cylinders through the crankcase ventilation system, destroying the engines due to uncontrolled combustion.

To configure the crankcase ventilation system and the engine oil galleries so that no oil could enter the intake tank during a 360 degree rollover, MTU engineers integrated a valve in the crankcase ventilation that closes depending on the vessel´s angle of inclination to prevent oil from escaping. The valve opens again automatically when the vessel has returned to an upright position.

To thoroughly examine whether the engine modifications could meet real-world demands, MTU Benelux used a special rollover testing unit that was designed to complete the turn sequence within 30-seconds – the average time a rescue vessel can perform a complete roll in extreme conditions.

Two 8-cylinder Model Series 2000 M84L engines power KNRM’s 20-meter, Class Nh 1816 lifeboat capable of traveling at speeds up to 31 knots. The first boat was delivered in the third quarter of 2013 and was christened at its home port Ijmuiden, by the Queen Maxima of The Netherlands in April 2014. After testing with KNRM is completed, Nh1816 and its successors will replace the ten lifeboats of the current Arie Visser Class. The vessel’s radius of action spans 348 nautical miles, and can accommodate 120 passengers if necessary.

The Royal Netherlands Sea Rescue Institution maintains a comprehensive network of 44 lifeboat stations that operate along the coast in all-weather circumstances. KNRM developed the new lifeboat class working together with the Technical University of Delft, Damen Shipyards and marine engineers from De Vries Lentsch.