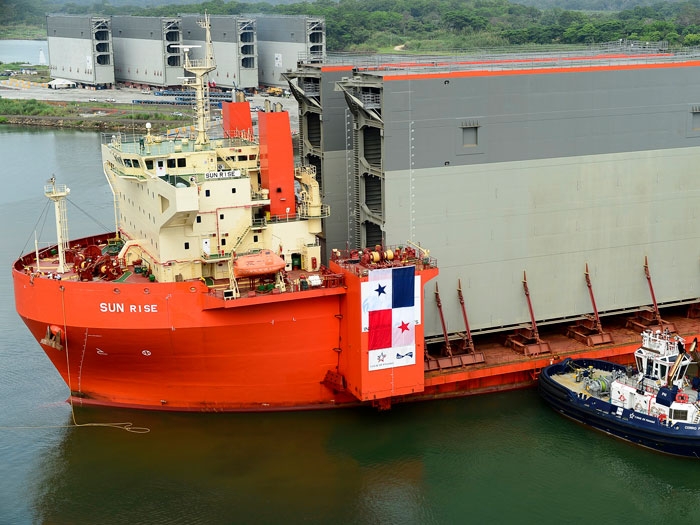 JUNE 11, 2014 — The Panama Canal Expansion Program is moving forward. Yesterday, the second shipment of four rolling gates for the Third Set of Locks arrived at the waterway’s Atlantic side on board the semi-submersible vessel STX Sun Rise.

“This is another milestone as it completes half of the 16 gates that will be used in the new locks,” said the administrator of the Panama Canal Authority, Jorge Luis Quijano.

Following a nearly one-month long journey, the ship completed its second trip that began in mid-May in the Port of Trieste, crossing the Gibraltar Strait and maneuvering the waters of the Atlantic Ocean.

Unlike the first shipment, these gates have two different dimensions.

The taller,”Type C,” gates were fabricated for lock head number 3 in the middle chamber of the Pacific locks. They are 57.6 meters long by 10 meters thick and 31.9 meters tall and weigh approximately 3,900 tons, with all internal fitments installed.

The shorter, “Type A,” gates will be located in lock head 1 in the Atlantic site’s upper chamber, adjacent to the lake. They are 57.6 meters long by 8 meters thick and 22.3 meters tall, and weigh approximately 2,300 tons.

The four rolling gates will be disembarked in the dock especially built for this purpose on the Atlantic side.

While the two gates destined for the Atlantic complex will remain in the staging area until the time of their installation, the other two will be transferred to the Pacific site once the installation of the concrete supports is completed on the unloading fock.

Gate fabrication, which started in October 2011, is being conducted by Italian subcontractor Cimolai SpA.

The new locks will operate with a redundant rolling gate system, with a total of 16 gates. The first shipment of rolling gates arrived in Panama on August 20, 2013. The third shipment, with two Type C and two Type F rolling gates is scheduled to arrive in Canal waters in October of this year.

Grupo Unidos por el Canal is the contractor responsible for the design and construction of the Third Set of Locks. Following an agreement signed between the contractor and the Panama Canal Authority, all rolling gates must be in Panama by February 2015.