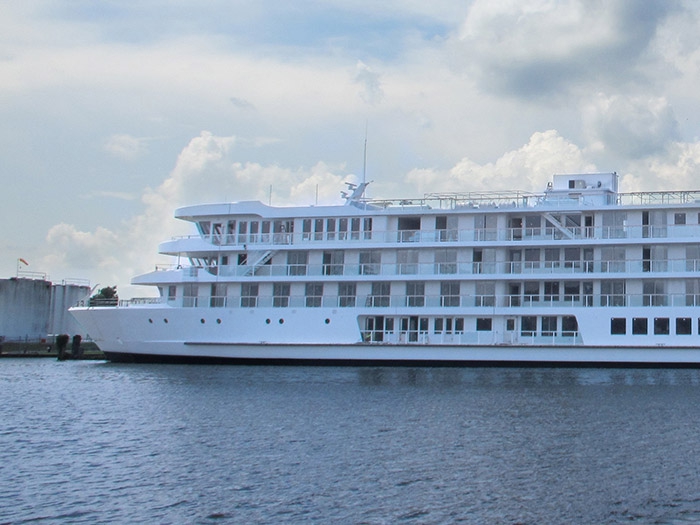 AUGUST 1, 2018 — American Cruise Lines reports that the first modern riverboat in U.S. history is nearly complete. This week, American Song, under its own power, moved from the East Outfitting Basin at Chesapeake Shipbuilding in Salisbury, MD, to the shipyard’s outfitting bulkhead for the final outfitting touches.

American Song is set to make its historic inaugural cruise October 6, 2018 on the Mississippi River from New Orleans—during the city’s Tri-centennial year.

American Cruise Lines says the 184 passenger vessel will introduce many pioneering innovations. The new riverboat will feature lounges soaring 40 feet above the water with triple the glass of other riverboats and will also feature the Atrium, a four-story glass-enclosed area with a large domed skylight, which will serve as the central gathering point for the entire ship.

American Song’s sister ship, American Harmony, the second modern riverboat in the series, is currently five and a half weeks ahead of schedule and will be launched later this fall. American Harmony will go into service in the spring of 2019 on the Mississippi River where it will join two of American’s Victorian-style paddlewheelers, Queen of the Mississippi and America.

When it debuts this October 2018, American Song will cruise the Line’s Lower Mississippi River itineraries for the remainder of the year (including American’s holiday-themed cruises throughout December) and reposition to the West Coast on the Columbia & Snake Rivers in 2019.

American Song and American Harmony are both designed and built by Chesapeake Shipbuilding.