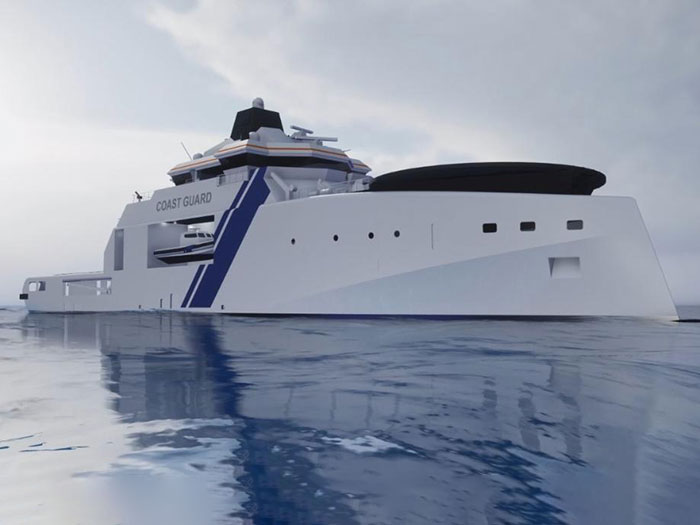 The Finnish Border Guard and shipbuilder Meyer Turku Oy have entered into a letter of intent (LOI) for the construction of two new multi-purpose external patrol vessels.

The Finnish Border Guard’s VL 2025 project will replace three decommissioned patrol vessels whose life cycle is no longer profitable. The LOI was awarded after Meyer won a tender issued earlier this year. Contract negotiations are now under way with the aim being to conclude a final shipbuilding contract by the end of this year.

The award is good news for the Turku yard which has been hard hit by the down turn hitting the cruise sector,

“This is a very important letter of intent for Meyer Turku and the entire Finnish shipbuilding network,” says Meyer Turku Executive Vice President Tapani Puller. “We are emerging from the crisis caused by the corona virus and the letter of intent signed today will create more stability for our order book, which runs until 2026.”

“The acquisition of two multi-purpose patrol vessels is necessary to replace vessels already in decommissioning,” says Rear Adm. Markku Hassinen, Deputy Head of the Finnish Border Guard. “The acquisition will bring Finland’s readiness for maritime safety tasks to the level required by the challenges of the operating environment.”

Announcing plans for the acquisition earlier this year, the Border Guard noted that maritime traffic in the narrow Baltic Sea has been growing for decades. At the same time, the transport of oil and other hazardous substances has increased, which increases the risk of environmental damage. Passenger ship traffic is also growing and the large numbers of passengers on luxury cruise ships visiting Baltic ports pose challenges to the maritime rescue system and rapid evacuation capabilities.

Among other things, the modern multi-purpose patrol vessels called for in the VL 2025 project will be able to respond to explosive and chemical hazards and collect substances that are hazardous to the environment, Able to moving in an 80-centimeter-thick fixed ice field, the vessels will be able yo remains stationary without anchoring, enabling life-saving and environmental protection tasks in any conditions.

Rescue capacity will be an important feature of the ship, with an interior that can accommodate at least 600 people for evacuation.

The patrol ship will also be able to act as an emergency tug and will be fuel flexible in preparation for the low-emission fuels of the future.