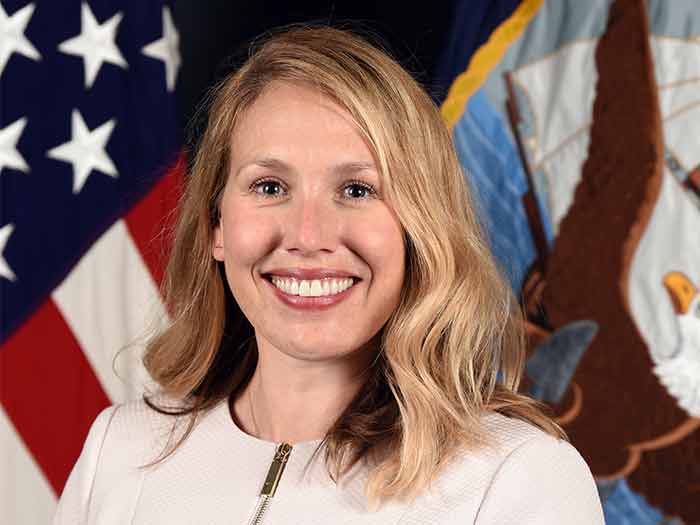 When last we reported on Meredith Berger, she was swinging a bottle of bubbly at Ingalls Shipbuilding to christen LPD 28 Fort Lauderdale. Yesterday, she was designated as performing the duties of the Under Secretary of the Navy. In this role, she serves as the deputy and principal assistant to Secretary of the Navy Carlos del Toro, as well as the chief operating officer and chief management officer for the Department of the Navy. Additionally, she oversees intelligence activities, intelligence-related activities, special access programs, critical infrastructure, and sensitive activities within the department.

Berger was confirmed as the Assistant Secretary of the Navy for Energy, Installations & Environment August 5. In this role, she is responsible for providing oversight and policy for U.S. Navy and Marine Corps energy and climate resilience; infrastructure sustainment, restoration and modernization; military construction; acquisition, utilization and disposal of real property and facilities; environmental protection, planning, restoration and natural resources conservation; and safety and occupational health.

She has served in a variety of policy and senior leadership positions in both federal and state government and the private sector. Before her nomination, Berger was a senior manager for the Defending Democracy Project at Microsoft Corporation. She was a Fellow with the Harvard Kennedy School’s Belfer Center for Science and International Affairs and a Department of Defense Fellow.

She also served as the Deputy Chief of Staff to President Obama’s Secretary of the Navy Ray Mabus, advising the Secretary on the formulation and execution of Department-wide strategy, policies, plans, and standards. Ms. Berger held policy positions with the Environmental Protection Agency and the Office of the State of Florida Chief Financial Officer.

Berger holds a master’s degree in Public Administration from the Harvard Kennedy School, a Juris Doctor from Nova Southeastern University, and a Bachelor of Arts in American Studies and Spanish from Vanderbilt University. She has earned the Secretary of the Navy Distinguished Civilian Service Medal, Secretary of Defense Medal for Exceptional Public Service, and the EPA Gold Medal for Exceptional Service.