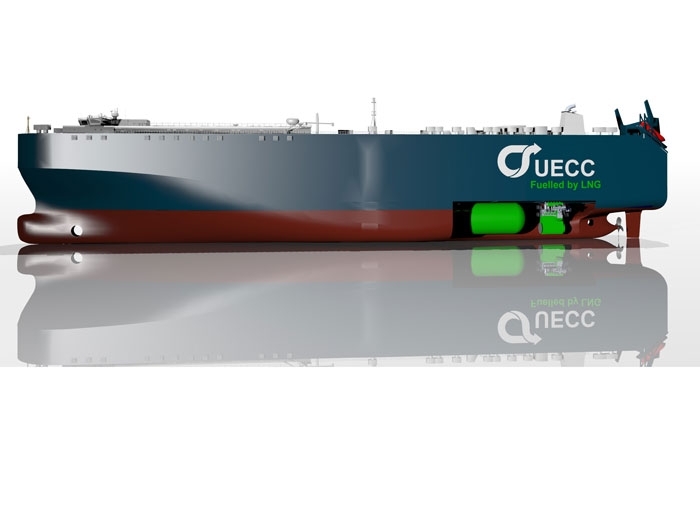 NOVEMBER 3, 2014 — MAN Diesel & Turbo says that a single MAN B&W 8S50ME-GI dual-fuel engine will power each  of the two LNG fueled  PCTC (Pure Car Truck Carriers) ordered earlier this year by United European Car Carriers (UECC), which is jointly owned by Nippon Yusen Kabushiki Kaisha (NYK) and Wallenius Lines. The ships will be built at the NACKS shipyard in Nantong, China which is a joint venture between Kawasaki Heavy Industries and China Ocean Shipping. Deliveries of both the vessels will be in the second half of 2016 (see earlier story).

MAN Diesel & Turbo says the PCTCs will be capable of operating on LNG fuel, heavy fuel oil or marine gas oil, providing greater flexibility and efficiency. They will be the world’s first vessels of their type to be fitted with an LNG propulsion system. When in service, they will be capable of completing a 14-day roundtrip in the Baltic operating solely on LNG, including main engine and auxiliary power generation.

UECC ordered the newbuildings in conjunction with a long-term fleet evaluation process of its Baltic fleet. Among the key requirements for new tonnage was an ability to meet all expected SECA regulations and has signed an exclusive contract for the supply of LNG fuels to the vessels in the port of Zeebrugge using a dedicated LNG ship-to-ship bunker vessel.

“The LNG installation is a pioneering design and will be one of the largest employed on a commercial vessel and the largest yet of its kind on a pure car and truck carrier,” says  Glenn Edvardsen, CEO of UECC. “We are proud of the exciting step UECC is taking towards greener and more environmentally friendly shipping.”

MAN Diesel & Turbo says that the ME-GI engine is the culmination of many years’ work and gives shipowners and operators the option of utilizing fuel or gas depending on relative price and availability, as well as environmental considerations.

The ME-GI uses high-pressure gas injection that allows it to maintain the many positive attributes of MAN B&W low-speed engines that have made them the default choice of the maritime community. It says that the ME-GI engine’s negligible fuel slip makes it the most environmentally friendly technology available.

An ME-LGI counterpart that uses LPG, methanol and other liquid gasses is also available, and has already been ordered.

The UECC vessels will be 181 m long with a 30 m beam and will have 1A super Finnish/Swedish ice class, facilitating year round trading in the Baltic area.

These will be the largest PCTC type vessels specifically designed for transiting the Baltic and other ice prone areas. Capacity is approximately 3,800 standard sized cars spread over 10 decks, but the deck configuration is optimized for both present and predicted future cargo mix and a significant part of the cargo capacity can be used to transport high and heavy cargo and any other cargo loaded on to Mafi trailers.