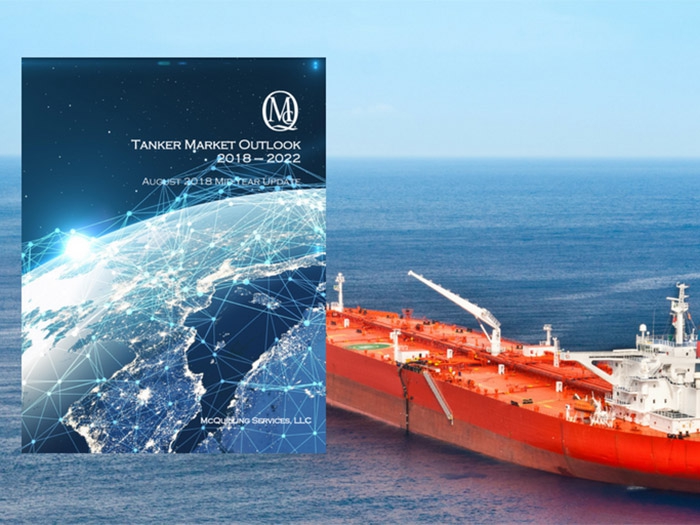 AUGUST 8, 2018 – McQuilling Services has released its 2018 Mid-Year Tanker Market Outlook Update. McQuilling says that global oil demand is expected to grow 1.5% in 2018 to over 99 million b/d with significant gains projected in the middle-light end of the barrel. The longer-term outlook calls for 1.1% gains per annum through 2022 amid strength in jet fuel, LPG and naphtha.

Global crude pricing benchmarks will face pressure next year with Brent expected to fall from an average US $72/bbl this year to US $70/bbl in 2019. On this basis, McQuilling expects global HSFO pricing to average US $386/mt this year and fall to US $345/mt the following year considering demand side impacts from upcoming global sulfur regulations (testing, inventory builds). Floating storage for fuel oil is likely to rise going forward, while excess Iranian crude will also likely be stored on floating tankers.

Crude and residuals transport demand is expected to total just over 10.8 trillion ton-miles in 2018, the highest recorded ton-mile demand. On average, mileage transited per ton by DPP tankers in 2017 measured 4,608 and thus far in 2018, similar levels (4,601) are being recorded. While mileage remains stable, actual transported volumes is showing a 1.5% rise in 2018 at just below 2.3 billion tons of crude and residual fuel loaded on tankers as crude intake at refineries is projected to reach 82.9 million b/d, up about 1 million b/d year-on-year.

Total VLCC demand in 2017 amounted to about 6.6 trillion ton-miles, up 5.5% from 2016 as the growth of Atlantic Basin exports offset stagnating demand from the Middle East to the Far East. In 2018, McQuilling projects slightly lower growth of 4.6%, following a 2H resurgence of Middle East crude exports amid a shift in the OPEC compliance accord. The U.S. will continue to add ton-mile demand for VLCCs, particularly if logistical infrastructure improves as crude supply rises. McQuilling estimates that U.S. Gulf flows to the Far East will expand by 9.7% per annum through 2022 as the latter’s crude deficit expands by 1.8 million b/d over this period, although short-term pressure will likely stem from recent US-China trade disputes.

The future situation is less certain for Iran with the current U.S. administration’s decision to re-impose sanctions. During the previous Iranian sanctions period, McQuilling identified OECD Asia and Europe as the likeliest to reduce or eliminate Iranian imports with up to 955,000 b/d at risk. Historical observations of cross-over between Iran and other Middle East producers is well established with Iraq and Saudi Arabia, projected to absorb Iran’s lost exports, particularly to Europe. Overall, our analysis of these fundamentals shows a 1.0% increase in the Middle East > Southern Europe Suezmax trade in 2018.

LR2 demand is projected to increase in 2018 by 1.1%, despite a relatively strong 3.1% increase in volumes. The average mileage for LR tankers has been steadily declining as the refinery configuration mismatch with product demand in key regions has been mitigated through expanding capacity in the latter. In 2018, the MR2 sector is expected to rise by 4.1% versus year-ago levels as the growth in U.S. Gulf Coast exports to West Coast South America outpaces the declines observed in flows to East Coast South America, although this is projected to stabilize in 2019.

In 2018 and 2019, McQuilling project sthe DPP fleet to grow as a whole by 2.9% and 2.0% on an average inventory basis, when measured by absolute vessel count. For the VLCC sector, we anticipate average inventory growth to slow to an average of just 1.0% in the 2021/22 timeframe, while for the Suezmax and Aframax segments, an average of under 1.5% is projected from 2019-2022. Overall, CPP net fleet growth is projected to average 0.4% over the next two years and only 1.1% over the full five year projection period, although the5.5% annualized growth in the chemical fleet must be considered.

Newbuilding prices in 2018 are projected to increase 4.8% from 2017 levels, in-line with McQuilling’s January projections. Contract values are less sensitive to the prevailing earnings environment despite McQuilling’s call for time charter rates to decline in 2018. In 2019,VLCC contract values basis Korea/Japan are projected to average US $90.8 million, while Suezmax orders are forecast to average US $61.3 million. On average, McQuilling projects a 3.4% increase year-on-year in DPP newbuilding values for 2019.

Freight rates for CPP tankers are projected to improve through 2020, with potentially steep upward support envisioned in 2019 amid a favorable net fleet growth situation. McQuilling projects TC1 and TC5 to average WS 105 and WS 120 in 2019, respectively, with round-trip TCEs coming in at US $12,500/day and US $10,300/day, respectively, while a more favorable scenario is projected using triangulated routes for these tankers, up 28% and 44% for the LR2’s and LR1’s, respectively. For the MRs, the US Gulf >Caribbean trade is expected to average US $470,000 per voyage next year or US $15,700/day. On the benchmark TC2 voyage, McQuilling’s WS rate forecasts shows WS 140 for 2019, peaking at WS 147 in 2020 before trending to WS 146 in the final two years of the forecast.