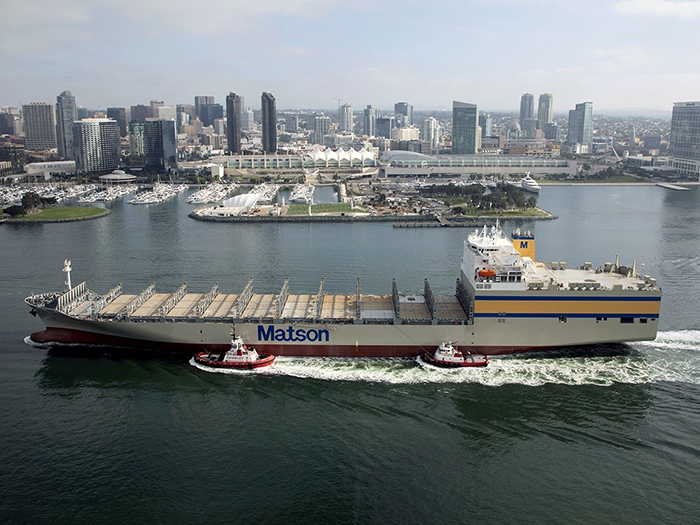 At 870 feet long, 114 feet wide (beam), with a deep draft of 38 feet and with a grt of 59,522 Matsonia and sister ship Lurline, delivered at the end of last year, are Matson’s largest ships and the largest ConRo vessels ever constructed in the U.S. They are also among Matson’s fastest vessels, with a top speed of 23 knots.

The Kanaloa Class vessels feature an enclosed garage with room for approximately 500 vehicles, plus ample space for rolling stock and breakbulk cargo.

The two are the largest vessels of their kind ever built in the U.S. They join two new containerships, Daniel K Inouye and Kaimana Hila, themselves the largest of their kind in the U.S. commercial fleet, in completing the renewal of Matson’s Hawaii fleet. Built by Philly Shipyard, they entered service in 2018 and 2019, respectively. Each 850-foot long containership has a 3,600 twenty-foot equivalent (TEU) capacity.

“Putting four new ships into service in a three-year span is a significant accomplishment that culminates eight years of planning, project management and coordination for teams across many departments at Matson,” said Matt Cox, chairman and CEO. “Together with the modernization and expansion of our Honolulu terminal, these investments position Matson to provide efficient, reliable service to Hawaii for decades to come.”