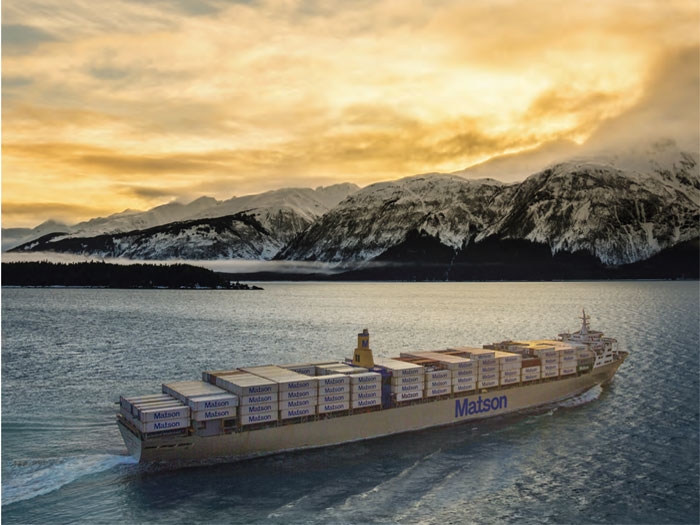 Matson President & CEO Matt Cox, said, “2015 was an exceptional year for Matson.  Financially, it was the best year in our history.  Strategically, we substantially grew our ocean transportation platform with the acquisition of the Alaska trade and we reinforced our position as the service leader in Hawaii, Guam, China and Micronesia.”

Cox added, “In 2016, we expect to continue to deliver strong operating results, although modestly lower than the record level achieved in 2015.  Matson’s core businesses are well-positioned to generate significant cash flow to pay down debt, fund growth initiatives, including our new vessel investments, and return capital to shareholders via both dividends and share repurchases.  The integration of our Alaska operations continues to progress well and will remain a focus this year.  Our investment in Alaska is supported by the attractive cash flow and earnings generation characteristics of the business and is on track to achieve our earnings and cash flow accretion expectations.”

In the fourth quarter 2015, the Hawaii trade experienced modest westbound market growth and, as expected, Matson achieved meaningful volume gains as it deployed additional vessels in response to a competitor’s service reconfiguration.  Matson believes that the Hawaii economy remains healthy and expects the continued progress of the construction cycle in urban Honolulu to generate modest volume growth.  As a result, for the full year 2016, Matson expects its Hawaii container volume to be moderately higher than 2015.

In the China trade, despite freight rates for other ocean carriers reaching historic lows, Matson achieved average freight rates that approximated the strong rates achieved in the fourth quarter 2014.  And, as expected, Matson’s China volume in the fourth quarter 2015 was moderately lower due to one fewer sailing, the absence of the extraordinarily high demand experienced in the fourth quarter 2014 during the U.S. West Coast labor disruptions, and market softness.  In 2016, international vessel overcapacity is expected to persist with vessel deliveries outpacing demand growth and putting continued pressure on international ocean carrier freight rates.  Matson expects its expedited service to continue to realize a sizeable premium and maintain high vessel utilization in 2016, albeit at average freight rates that are significantly lower than 2015.

In Guam, economic activity in the fourth quarter 2015 was stable and Matson achieved modest volume growth as the expected launch of a new competitor’s bi-weekly U.S. flagged containership service to Guam was delayed until early 2016.  For the full year 2016, Matson expects to experience competitive volume losses to this new service.

In Alaska, volume for the fourth quarter 2015 was about 14,200 containers.  In 2016, Matson expects Alaska volume to be modestly lower than the total 67,300 containers carried by Horizon and Matson in 2015.  Matson intends to operate a base deployment of three containerships in Alaska and expects to complete the installation of exhaust gas scrubbers on those ships in 2016.  Matson’s integration of the Alaska operations is progressing well and is expected to be substantially complete by the end of the third quarter 2016.  Selling, general and administrative expenses related to the Horizon Acquisition are not expected to materially exceed the incremental run-rate target of $15.0 million per year in 2016.  Further, the Company continues to expect to achieve its earnings and cash flow accretion targets for the Horizon Acquisition by mid-2017.

Matson’s terminal joint venture, SSAT, continued to benefit from improved lift volume during the fourth quarter.  For the full year 2016, Matson expects SSAT to contribute profits modestly lower than the $16.5 million contributed in 2015, primarily due to the absence of factors related to the clearing of international cargo backlog in the first half of 2015 that resulted from the U.S. West Coast labor disruptions.

Interest Expense: Matson expects its interest expense in 2016 to be about $19.0 million.

Income Tax Expense: Matson expects its effective tax rate for the full year 2016 to be about 39.0 percent.