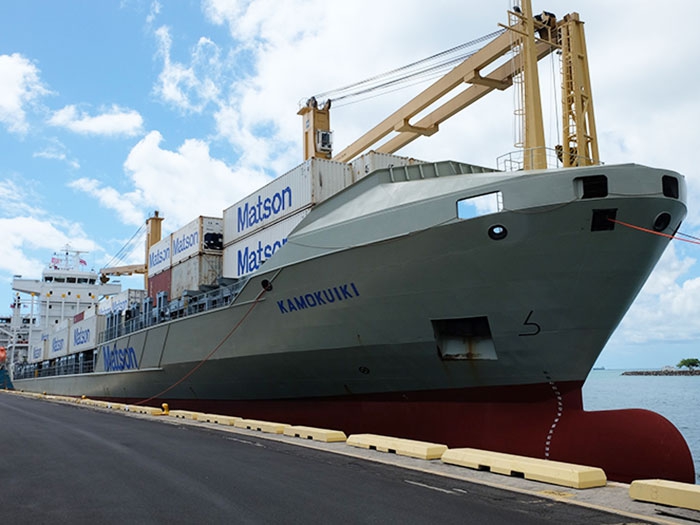 OCTOBER 30, 2018 — Matson, Inc. (NYSE: MATX) has launched a new direct U.S. flag service between Honolulu and the Republic of the Marshall Islands (RMI), reducing cargo transit times from the U.S. mainland by as many as eight days. The new service will call at three ports in the RMI – Kwajalein, Ebeye and Majuro every 17 days.

Matson has purchased a 700-TEU, U.S.-flagged containership to operate the new service. Now named Kamokuiki, or “small island or vessel” in the Hawaiian language, the vessel is well suited to serving island communities with two 45 ton cranes onboard, hydraulic folding hatch covers and high maneuverability that allows docking without tugs.

Formerly named Marstan, the vessel was purchased from Sealift, Inc., Oyster Bay, NY, last year. It was built in Germany in 2000 and brought under the U.S. flag in 2013.

The vessel’s first voyage on the new service departed Honolulu on Saturday and will arrive at Kwajalein on Saturday, November 3.

Matson has served the RMI since 1972. It currently serves Kwajalein, Ebeye and Majuro from the U.S. West Coast via Guam, where westbound containerized and bulk cargo is transshipped to Matson’s Micronesia service. The new service from the U.S. West Coast to Kwajalein, Ebeye and Majuro via Honolulu will deliver cargo with a transit time of approximately two weeks, compared to three weeks or more with the current service.

“Matson has been consistently rated the No. 1 ocean carrier in the world because of its commitment to operating the fastest and most reliable service in the markets we serve,” said John Lauer, Chief Commercial Officer. “We are excited to bring U.S. flag service and shorter transit times from the U.S. West Coast to Kwajalein, Ebeye and Majuro.”