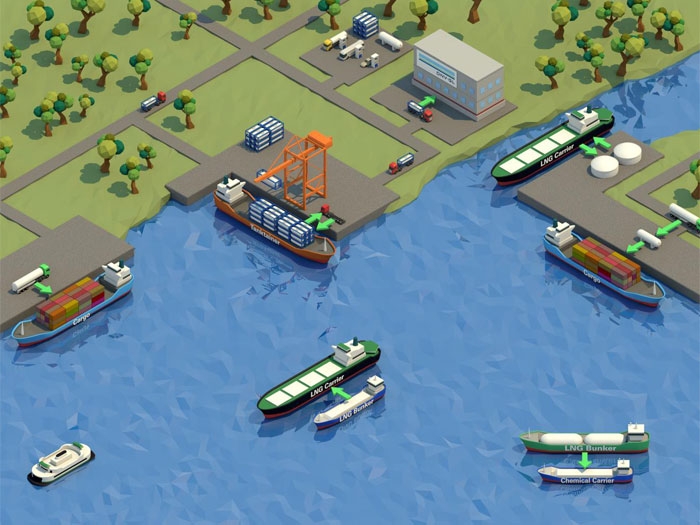 SEPTEMBER 8, 2014 — The U.S.Maritime Administration has released a study on LNG bunkering contracted from DNV GL with the objective of analyzing existing LNG bunkering infrastructure, safety, regulations, and training, and identifying and recommending best practices.

In its introduction, the study says that, while LNG is an attractive fuel choice for many vessels, its use as a marine propulsion fuel is a relatively new concept in the U.S. and there are significant safety and regulatory gaps. In addition, there are several challenges related to the development of a national infrastructure for LNG bunkering.

Over the course of the study, DNV GL has made recommendations for specific audiences concerning standards and integration of LNG bunkering into U.S. maritime operations.

LNG Bunkering Infrastructure in the U.S.

Infrastructure development as well as vessel transition to LNG propulsion will be driven by tighter environmental regulations and price differences between conventional fuels and natural gas. Because the development of infrastructure is acutely dependent on the needs of specific ports and stakeholders, there is no single bunkering option.

Recommendations necessary to be considered for development of bunkering infrastructure should be focused on the following:

In general, development and implementation of a regulatory approval process for LNG bunkering operations and associated facilities is recommended. The process should include a Quantitative Risk Assessment (QRA) that utilizes probabilistic risk acceptance criteria to assess the acceptability of the risk posed. Specific recommendations to promote safe LNG bunkering operations include the following:

Although the use of LNG marine fuel is not a new concept, there exists a significant regulatory gap for bunkering and associated infrastructure operation. The establishment of uniform standards and guidelines for state and local lawmakers will allow for a consistent and predictable regulatory framework. Regulatory gaps were identified for LNG metrology, local vs. federal jurisdiction over bunkering operations, and a lack of framework for the review of potential risks related to LNG bunkering from non-self-propelled barges. One of the primary conclusions identified the need for greater clarity in regulations addressing simultaneous operations (SIMOPS).

Proper training for crew and operators involved with LNG bunkering operations is critical for establishment and maintenance of safe practices. Existing national and international regulations associated with LNG bunkering operations were identified and evaluated. Recommendations were provided based on current efforts at the IMO for updating the IGF (The International Code of Safety for Ships using Gases or other Low-Flashpoint Fuels ) code, ISO (The International Organization for Standardization ) Draft TS 18683, and DNV GL Competence Related to the On Board Use of LNG as Fuel standard No. 3.325 that recommend safeguard criteria for best practice of LNG bunkering. A training scheme for crew and first responders has been provided that addresses basic, advanced, and site-specific recommended practices.