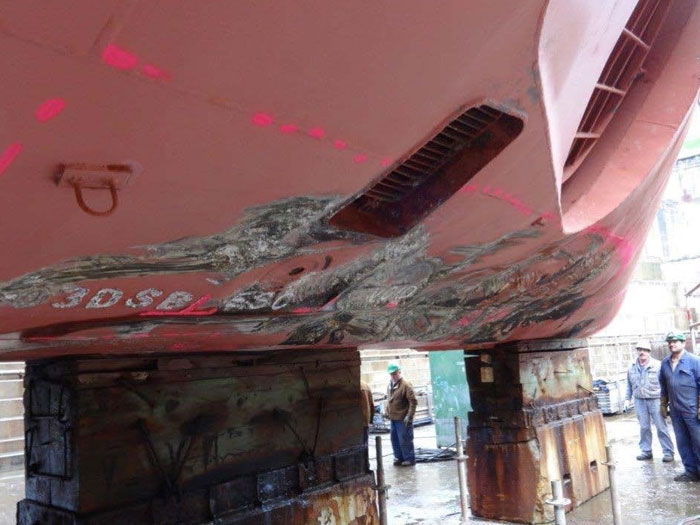 ULY 15, 2015 — The U.K. Marine Accident Investigation Branch has published a report on a November 30, 2014 incident involving the grounding of the 6,190 gt U.K. flag general cargo vessel Vectis Eagle while entering Gijon, Spain, under pilotage. As a result of the grounding, Vectis Eagle suffered damage to its bottom structure and framing in way of the forepeak tank and speed log void space. Additionally, hull plating on the bow section, and both sides of the forward bilge keels had been set in.

According to the MAIB, the vessel grounded as a result of the loss of directional control that occurred as the vessel was rounding an inner breakwater. The investigation identified that Vectis Eagle was unnecessarily close to the breakwater and that the turn was started too early. The pilot had been “navigating by eye” and his advice was not challenged by the master.

The cause of the loss of directional control could not be determined. The cargo ship’s master did not save the VDR data and attempted to conceal the grounding.

“The nine minute transit from the pilot’s boarding to the vicinity of No1 breakwater was sufficient time for the master and pilot to exchange information,” says the report. “However, their discussion was mainly limited to engine settings and speeds, and it did not include the passage plan to the berth.”

Although the master had checked and approved the vessel’s plan, which allowed greater clearances off the breakwaters than the route followed by the pilot, the report says it is evident that he relied solely on the pilot to keep the vessel clear from navigational dangers.The grounding occurred six days after Vectis Eagle suffered an engine control failure in a lock in the Kiel Canal. The master was unable to stop the vessel’s headway and its bow made contact with the lock gate. The lock gate was severely damaged; the damage to Vectis Eagle’s bow was superficial.

The master’s reliance on the Gijon pilot was “probably influenced to some extent by anxiety resulting from the accident in the Kiel Canal” says MAIB.

“Nonetheless, as the master retained the responsibility for the safety of his vessel, his failure to sufficiently challenge both the vessel’s proximity to the breakwaters and the pilot’s premature initiation of the turn to starboard were significant omissions.

“As Vectis Eagle remained stationary next to No 4 breakwater between 0804 and 0806, apparently neither the master nor the pilot was certain that Vectis Eagle had grounded. The noise and vibration of the engine running astern, the noise of the anchor cable paying out and the movement of the vessel would have masked the occurrence to some degree.

Nonetheless, it is evident from the rapid checking of the forward tanks, followed by the pilot’s external inspection of the hull once the vessel was alongside, that the master and the pilot were aware that Vectis Eagle might have been damaged.

“Both the reported loss of directional control and the length of time the vessel was stationary despite its engine set to ‘full astern’ warranted investigation. Instead, the master neither informed the chief engineer, who was in the engine room at the time, of the apparent steering failure nor saved data from the VDR when the vessel was alongside.

Moreover, he took steps to conceal the possibility that the vessel had grounded. This included influencing the behavior of the vessel’s crew.

Furthermore, following the discovery of water and damage in the pipe tunnel, the master did not inform the pilot or report the possibility of the vessel grounding to the ship’s manager or the embarked surveyors and inspectors.

“The master’s attempt to conceal the grounding showed a lack of integrity and misled the ship’s manager to believe that the damage had resulted from the contact with the lock gate in the Kiel Canal. It was only when Vectis Eagle entered dry dock that the ship manager realized that this was not the case. By then, the opportunity to save the VDR data was lost.

“Following Vectis Eagle’s contact with a lockgate in the Kiel Canal the master was probably anxious about the vessel’s handling, and his insistence on testing the main engines during the pilotage in Gijon indicates that he was keen to avoid a similar occurrence. The grounding on entering Gijon, the second of two accidents in quick succession, would therefore have caused the master considerable concern about the likely reaction of his employers. However, the failure to report the accident was potentially dangerous. Vectis Eagle’s next scheduled port was in Venezuela and, had the damage not been found and the vessel sailed as planned, its passage across the North Atlantic Ocean in winter with a weakened hull would have put the vessel and its crew at unnecessary risk.

MAIB has made the following recommendation to Vectis Eagle’s managers, Carisbrooke Shipping Ltd, aimed at ensuring the circumstances and the lessons to be learned from this accident are brought to the attention of its crews.