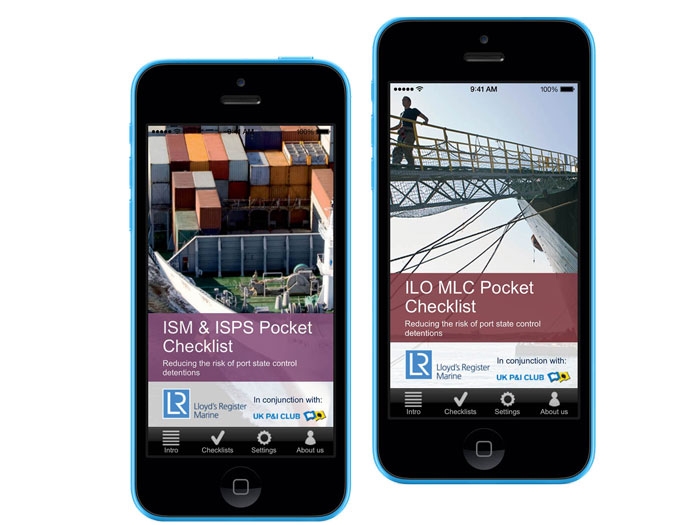 Both apps are free and are available for iPhone, iPad, and Android devices

In a fully paperless operation, the apps enable ships’ crews and their managers to view necessary legislative and regulatory requirements, save multiple checklists, check off completed activities, add essential notes and send the completed checklists via email.

LR and the UK P&I Club have analyzed ISM, ISPS and ILO MLC reported deficiencies found by Port State Control authorities and the apps have been designed to help counter the risk of detentions and help companies comply with the legislative and regulatory requirements.

Captain Jim Barclay, Lloyd’s Register’s Port State Control specialist said: “After the release of our first smartphone app for the ILO MLC Pocket Checklist we received very good constructive comments from the marine industry which showed that the app was indeed very helpful, however, there was room for improvement by making the app more interactive. We have taken on those comments and this new edition of the ILO MLC app is enhanced by the improvements requested by the marine industry.

“Now, launching another app for ISM/ISPS we can provide further support to benefit both ship and shore based personnel in the course of their duties.”

UK Club Loss Prevention Director Karl Lumbers explained:  “Just as the MLC 2006 convention aimed to rationalize the complex previous legislation relating to seafarers, we thought it made sense to simplify the compliance process as much as possible via the guidance of a checklist.

“It would be frustrating for our owners to face detention due to simple teething problems with documentation or other proofs of compliance.  Both these smartphone apps should empower the master and senior officers to make their ships compliant, guiding them through the necessary steps and providing an immediate note of what has been implemented and what remains outstanding. “

Lloyd’s Register and the UK Club have now produced six pocket checklists in a series that addresses regulatory compliance requirements and that has been well received by the marine industry worldwide.