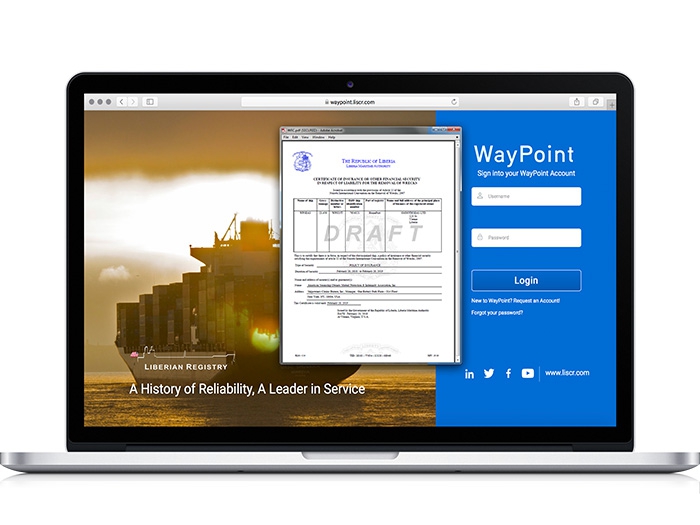 Now, a number of further features have been added.

WayPoint provides easy and intuitive access to information about vessels’ last Annual Safety Inspection data, when inspections are due for renewal, and indication of scheduled inspections. The range of certificates which can be viewed and obtained has now been expanded to include those relating to the Maritime Labor Convention, including DMLC Parts 1 and 11, SMC, and ISSC, and documents of compliance (DOC). The facility also exists to transmit certificates and related information directly from the registry.

“Liberia is way ahead of any other ship registry in the world in terms of its technological proficiency and efficiency,” says LISCR CEO Scott Bergeron. “Now, it is further ahead still, with the launch of its upgraded WayPoint system.”

According to Bergeron, WayPoint “is reinventing the way that shipowners will interact with their flag state and offering efficiencies that will facilitate regulatory compliance in meaningful ways.”

“Shipping is a round-the-clock business,” he says.” It never sleeps, and neither should ship registers, which must be able to provide information whenever it is needed, wherever it is needed, at any time of the day or night. Liberia is ahead of the game in this respect, and the owners and operators of Liberian-flag ships are the beneficiaries, with guaranteed access to the information they need to keep their fleets moving safely and efficiently.”

The Liberian Registry is already working on a complete suite of further upgrades that will expand the portfolio of online services which Liberia is able to offer.

WayPoint is accessible to clients through https://waypoint.liscr.com.