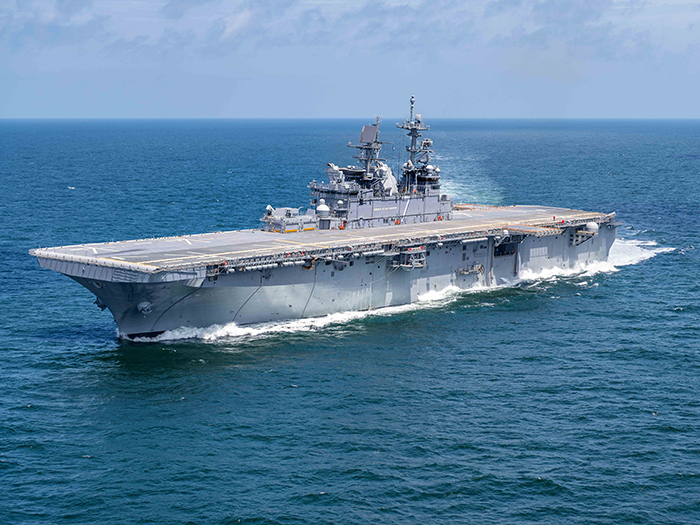 Builder’s trials is the Navy’s first opportunity to assess the operational readiness of the ship. During the trials, the multipurpose amphibious assault ship underwent dock trials followed by more than 200 at-sea test events.

“The Navy and industry team did a commendable job this week,” said Tom Rivers, amphibious warfare program manager for Program Executive Office (PEO) Ships. “America class ships bring tremendous capability to our sailors and marines and Tripoli will be the first large deck amphib to reach the fleet fully ready to integrate the Marine Corps air combat element to include Joint Strike Fighters.”

Tripoli is the second ship of the America (LHA 6) class, built to facilitate forward presence and power projection. LHA 7 is the last Flight 0 ship planned for construction and features an enlarged hangar deck, realignment and expansion of the aviation maintenance facilities, an increase in available stowage for parts and support equipment, and increased aviation fuel capacity.

LHA 8 will be the first Flight I ship, reincorporating a well deck to enhance expeditionary warfighting capabilities while maintaining the principal aviation characteristics of the Flight 0 ships.

“Congratulations to the Navy and Ingalls team for a solid LHA 7 builder’s trials,” said Ingalls Shipbuilding President Brian Cuccias. “We have an excellent leadership team, and they will now be focusing on getting the ship ready for acceptance trials and delivery to the Navy. The flight deck modifications to support the F-35 Joint Strike Fighter aircraft provide an increased aviation capacity and demonstrate how an experienced team can evolve the platform to meet the current threats across the globe.”

LHA 7 incorporates gas turbine propulsion plant, zonal electrical distribution, and fuel-efficient electric auxiliary propulsion systems first installed on USS Makin Island (LHD 8). LHA 7 will be 844 feet in length, will have a displacement of approximately 45,000 long tons and will be capable of operating at speeds of over 20 knots.