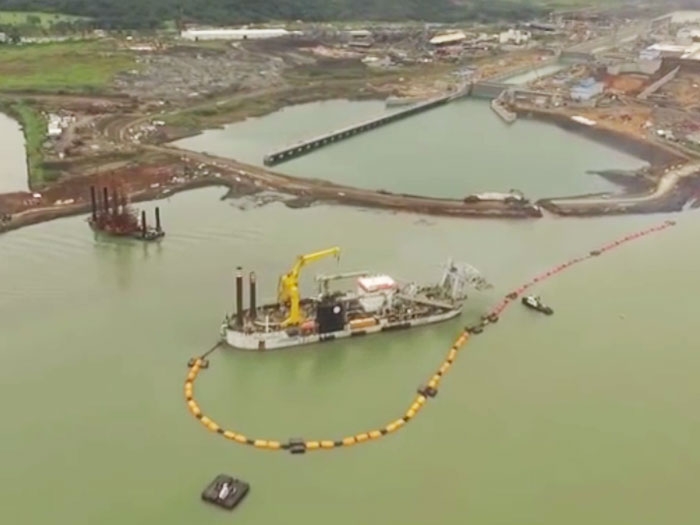 Panama Canal expansion is 93% complete, but "water seepage" in one section of the Pacific Locks will have to be repaired

SEPTEMBER 10, 2015 — The Panama Canal Authority (ACP) is awaiting a formal report from contractor GUPC before assessing whether opening of the expanded Canal will be delayed by water seepage discovered during testing of a section of the new Pacific Locks.

Filling of the new locks, which began in June, marking the start of a planned and methodical phase of operational testing of the locks, including culvert valves, maintenance bulkheads and gates, with the Panama Canal technical team closely involved to ensure that all tests meet the quality standards established in the contract.

As part of this testing, what the ACP calls “some water seepage” was detected in a specific area of the new Pacific Locks in a section that separates the middle chamber and lower chamber, as they were stress tested through exposure to level differentials much higher than those required for normal operations, but that might occur during dry-chamber maintenance works in the future.

The ACP is now awaiting a formal report from GUPC following detailed inspections. The report, will include a root cause analysis as well as the recommended repair methodology. On evaluating the report’s findings, the ACP will assess whether the project’s completion timeline will be altered.

ACP has designated two independent external structural engineers to conduct an objective evaluation of the reasons for this localized issue and assess GUPC’s solution. The ACP says that GUPC has the obligation to ensure the long-term performance on all aspects of the construction of the locks and to correct this deficiency. Moreover, GUPC’s contract with the ACP dictates that the group is responsible for modifications and corrections that may be required.

Meantime, the ACP says it is encouraged by the overall progress of the program, which has now reached 93 percent completion. Parallel work presses ahead with testing in other areas; the removal of the strip of land – known as a “plug”- separating the new Cocolí Locks from the Pacific Ocean, and the culmination of the Pacific Access Channel work. Last week saw the start of the removal of the dike or “plug” that separates the Atlantic ocean waters from the new Atlantic Lock.