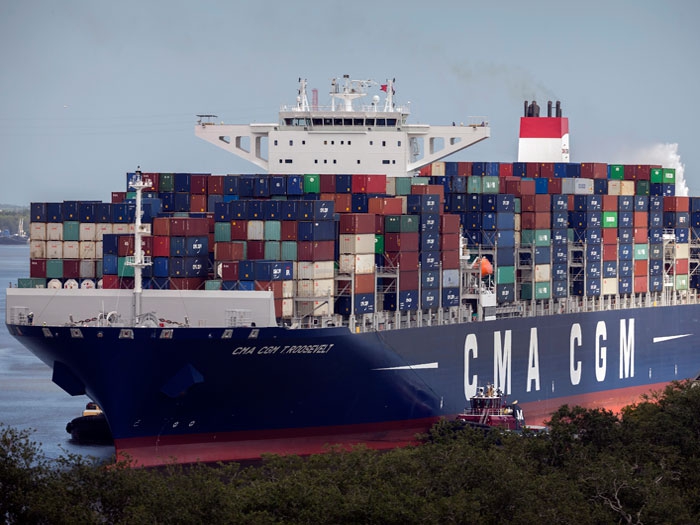 SEPTEMBER 5, 2017—The opening of the Panama Canal expansion last year has allowed a whole new breed of neopanamax containerships to call at U.S. East Coast ports. The 14,414-TEU CMA CGM Theodore Roosevelt became the largest yet when it recently called the Port of Savannah.

The CMA CGM Theodore Roosevelt is due to call at the Port of New York and New Jersey on Sept. 7.

Working the boxship with seven cranes at the 1,200-acre Garden City Terminal, the Port of Savannah is expected to move 4,500 containers (about 8,000 TEUs) on and off the ship.

Savannah’s Garden City Terminal features 26 ship-to-shore cranes and 146 rubber-tired gantry cranes. The GPA will add four ship-to-shore cranes in 2018 and another six in 2020, to bring the total to 36 cranes operating over nearly 10,000 feet of contiguous berth space. Garden City Terminal is five miles from Interstate 16 and six miles from Interstate 95.

In just three months, the Port of Savannah has hosted 13 vessels with a capacity of 13,000 TEUs or greater. The average number of containers moving on and off these big ships is 8,000 TEUs per vessel. The next 14,000-TEU vessel, the CMA CGM John Adams, will arrive in Savannah on Sept. 7.

“In Fiscal Year 2017, which ended June 30, the Port of Savannah served 69 vessels with a capacity of 10,000 TEUs or more,” said GPA Board Chairman Jimmy Allgood. “No other port on the East Coast has served more vessels, more often with more on-terminal assets than the Garden City Terminal.”

The Roosevelt is deployed on the new OCEAN Alliance’s weekly South Atlantic Express (SAX) service, which connects Asia and U.S. East Coast ports via the Panama Canal. The SAX service includes 11 vessels ranging in size from 11,000 to 14,000 TEUs.