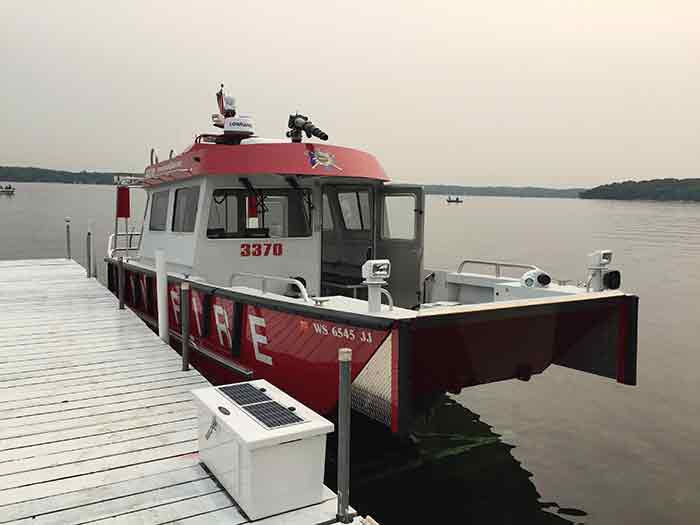 JANUARY 4, 2017 — Fire and rescue boat manufacturer Lake Assault Boats, part of Fraser Shipyards, Superior, WI, reports that one of its fireboats, from Linn Township, WI, was called upon to support firefighting teams from several departments when a large fire broke out in a corn drying facility located near the shores of Lake Geneva.

The Lake Assault fireboat, with a one-person crew, single-handedly supplied 45,000 gallons of water to several tenders from mutual aid departments that were called upon to help battle the blaze.

“We knew right away that it was going to require copious amounts of water. There was a lot of fuel involved and to extinguish it was not going to be easy,” said assistant fire chief Dan Pitt of the Town of Linn Fire and EMS department. “We quickly requested mutual aid support because we don’t have fire hydrants in our township. For this single fire, I flowed 45,000 gallons of water, and I was able to fill a 4,000-gallon tanker in about five minutes. I would expect this type of fire to last eight to 10 hours, but we were on the scene for four-and-a-half hours.”

Chad DuMars, Lake Assault vice president of operations added, “This is an excellent case study demonstrating how a single Lake Assault fireboat, with a one-person crew, was able to supply water to several responding fire departments enabling them to contain and extinguish a dangerous fire in far less time. It’s been very gratifying to hear the positive feedback from Chief Pitt and other departments in the region.”

The boat is also equipped with a full array of electronics, including a Lowrance touchscreen monitor, GPS, sonar, chartplotting, StructureScan sonar, and a remote controlled forward-looking infrared system (FLIR).

“Perhaps the most impressive thing about this fireboat is how impressed other departments were after seeing it in action,” said Chief Pitt. “They were amazed at how quick and easy the filling process was. You get off one truck and hook up to the next truck and we’re pumping water. There was absolutely no delay. From my perspective, it doesn’t get any better than that.”