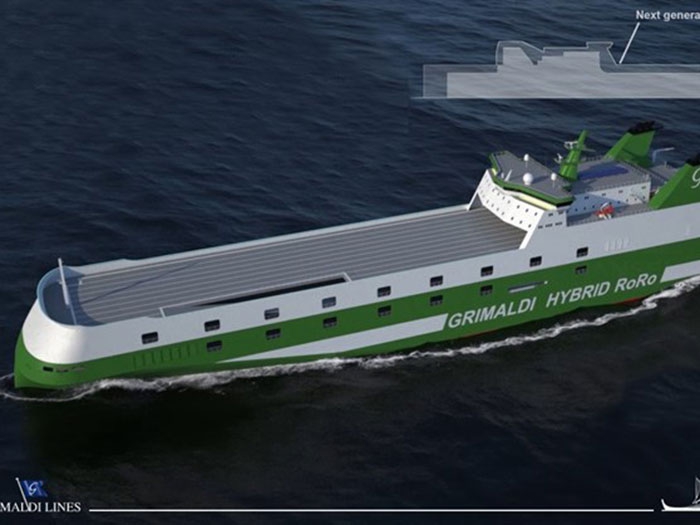 MAY 22, 2018 — Danish naval architectural firm Knud E. Hansen has been awarded a contract by China’s Nanjing Jinling Shipyard to develop the Basic Design of a number of large RO/RO vessels, based on the Grimaldi/ Knud E. Hansen design.

As we reported earlier this month, a total six of these ships have been ordered at Jinling by Grimaldi Group members Finnlines and Grimaldi Lines. Three of the ships will be operated by Grimaldi Lines in the Mediterranean while the three Finnlines ships, which will be built to the highest Finnish / Swedish ice class, will be deployed in the Baltic Sea.

Known as the “Grimaldi Green 5th Generation” (GG5G), the ships will be a new kind of hybrid RO/RO that will use fossil fuel during sailing, but will have a lithium-ion battery bank that will provide electricity to the ship while at berth so that there will be no emissions during the port stay. The batteries will be recharged during navigation, through shaft generators adding the so-called peak shaving system, and with the aid of 600 sq. m of solar panels.

An innovative air lubrication system under the keel will create bubble layers, reducing friction and hydrodynamic resistance to reduce fuel consumption and emissions.

The new vessels, the first of which is expected to be delivered in 2020, will have a length of 238 m, a beam of 34 m and a gross tonnage of 64,000 tonnes. They will be able to transport over 7,800 lane meters of rolling units, equivalent to approximately 500 trailers.

The design of the newbuilds was developed by the Technical and Energy Saving Department of the Grimaldi Group together with Knud E. Hansen in close cooperation with the shipyard.

“It’s been a pleasure to cooperate with Grimaldi on the design of these vessels,” says Knud E. Hansen Managing Director Finn Wollesen. “The collaboration has been very fruitful and enabled us to develop a new generation of vessels that represents real advancement in terms of sustainability and efficiency by using various new technologies.”