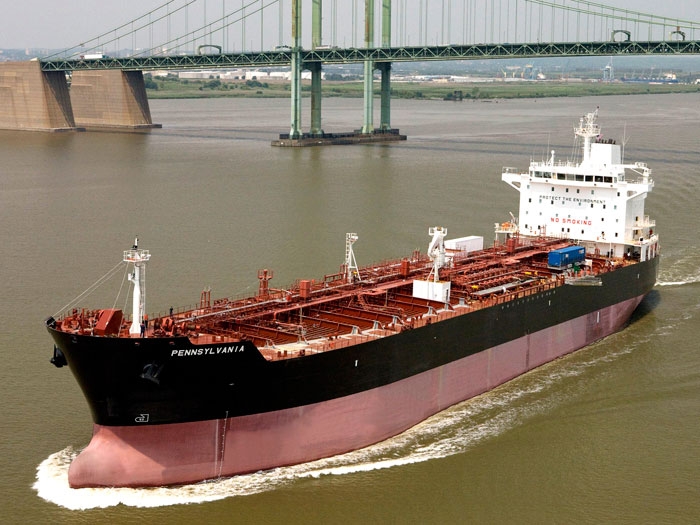 NOVEMBER 5, 2014 — Kinder Morgan Energy Partners, L.P. (NYSE: KMP) continues to grow its Jones Act tanker fleet. The pipeline giant first got into this market at the end of last year when it announced it was buying American Petroleum Tankers (APT) and State Class Tankers (SCT) from affiliates of the Blackstone Group and Cerberus Capital Management for $962 million in cash. That deal bought it five 330,000 barrel Jones Act tankers plus four more on order at shipbuilder GD NASSCO. In June, it ordered an additional newbuild at NASSCO.

Today, Kinder Morgan announced the closing of an agreement with Crowley Maritime Corporation to purchase two Jones Act tankers for approximately $270 million. The ships are the MT Pennsylvania and the MT Florida, which were delivered to Crowley in 2012 and 2013 respectively by Aker Philadelphia shipyard.

Crowley will continue to manage the vessels with no changes in crewing or operations. The tankers have been under long term charter transporting gasoline, jet fuel, diesel and crude oil since being placed into service in 2012 and 2013 respectively.

“This transaction helps Crowley maintain a healthy balance in our capital program,” said Tom Crowley, chairman and CEO. “We have invested more than $1.5 billion in new, U.S.-built tank vessels in recent years, giving us a fleet of 17 articulated tug barges (ATBs) and four new 330,000 barrel tankers being delivered in 2015 and 2016. We are committed to continuing to provide safe and reliable petroleum transportation to our customers.”

Under the new ship management agreement with Kinder Morgan for the Pennsylvania and Florida, Crowley will continue to utilize sailors from the American Maritime Officers Union and Seafarers International Union, who have operated the tankers since their delivery. The company’s ship management group provides worldwide technical management services to shipowners, operating ships for others as if they belonged to Crowley.

“Kinder Morgan’s continued expansion into the Jones Act tanker market demonstrates our commitment to provide customers with a variety of safe and efficient means to store and transport crude, petroleum products and chemicals,” said John Schlosser, president of KMP’s Terminals segment. “We are delighted to expand our relationship with Crowley, a premier provider of marine transportation services.”