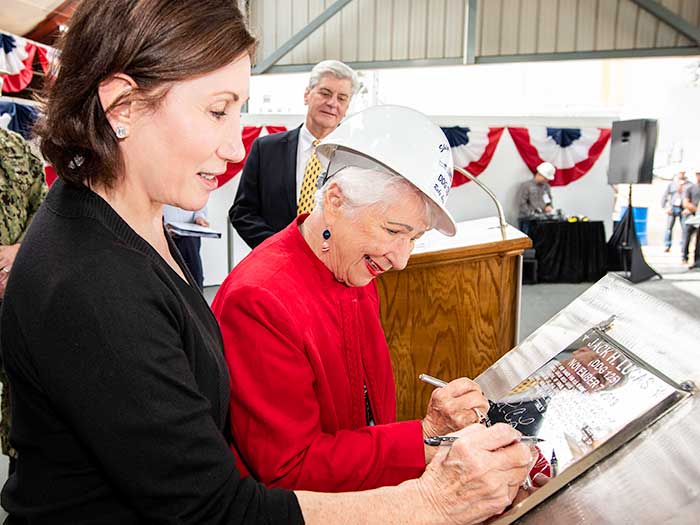 Ship’s sponsors (left to right) Catherine B. Reynolds and Ruby Lucas trace their initials onto a steel plate that will be welded inside the guided missile destroyer Jack H. Lucas (DDG 125). Photo by Derek Fountain/HII

Ship sponsors, Ruby Lucas, widow of the ship’s namesake, and Catherine B. Reynolds, an entrepreneur and philanthropist, authenticated the keel by etching their initials into the keel plate.

“This destroyer was named after an American hero, Medal of Honor recipient Jack Lucas, and I am humbled and honored to be here today as we authenticate the keel on his namesake ship,” said Capt. Seth Miller, DDG 51 class program manager, Program Executive Office (PEO) Ships. “The Flight III ships will bring increased lethality and warfighting capacity to our warfighters, and today’s milestone is the first of many to come as we work to deliver this highly capable ship to the Fleet,” he added.

DDG 125 will be the first Arleigh Burke class destroyer built in the Flight III configuration with improved capability and capacity to perform Anti-Air Warfare and Ballistic Missile Defense in support of the Integrated Air and Missile Defense mission.

The Flight III design contains modifications from the earlier DDG 51 class, to enable the SPY-6 radar, in association with Aegis Baseline 10, which includes larger electronically scanned arrays and the power generation and cooling equipment required to operate the powerful new radar.

YOUNGEST TO WIN MEDAL OF HONOR

“We are honored to have with us today the sponsors of this great ship, including Ruby Lucas, widow of our ship’s namesake. It is Navy tradition to name destroyers after men and women who served their country with distinction and this ship is certainly no exception,” said Ingalls Shipbuilding President Brian Cuccias. “Jack Lucas was born at a unique point in history and destiny had plans for the youngest service member awarded the Medal of Honor in World War II.”

“One of the best days of my life was the day I met Jack. I didn’t know a thing about him, but that day changed my life forever,” said Lucas. “God has always looked out for me and he has always looked after Jack. It has always been my wish that Jack would be remembered for all time. His personal history is without comparison. Now my wish for this ship is that Jack himself would move over it. May God bless this ship named Jack H. Lucas and may God bless America”

At the age of 14, Jack H. Lucas, forged his mother’s signature to join the U.S. Marine Corps during World War II. Then a private first class, he turned 17 just five days before the U.S. invasion of Iwo Jima and stowed away on USS Deuel (APA 160) to fight in the campaign. During a close firefight with Japanese forces, Lucas saved the lives of three fellow Marines when, after two enemy hand grenades were thrown into a U.S. trench, he placed himself on one grenade while simultaneously pulling the other under his body. One of the grenades did not explode; the other exploded but only injured Lucas.