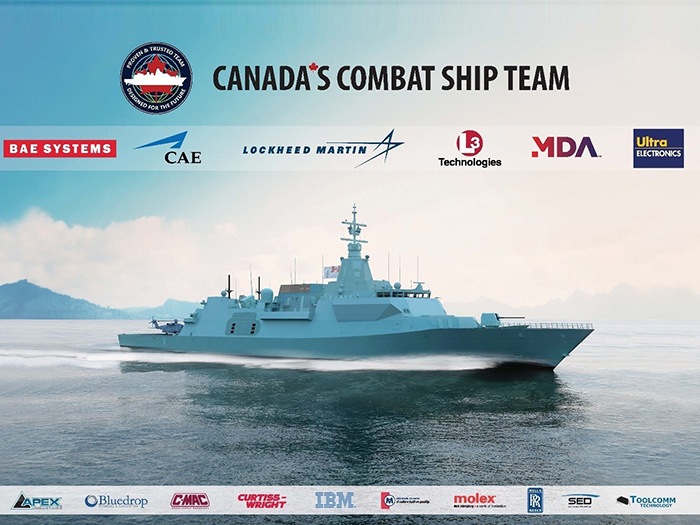 BAE Systems Type 26 Global Combat Ship has notched up another success. Irving Shipbuilding, which will build all 15 Canadian Surface Combatant ships at its Halifax Shipyard has awarded the design contract to Canada’s Combat Ship Team.

Regardless of whom their ultimate corporate parents may be, the team members are going to great lengths to stress their Canadian identities and, indeed, the team employs a combined 9,000 Canadians in 40 facilities from coast to coast and engages a Canadian supply chain of more than 4,000 small and medium sized enterprises. The team also secured several additional partners, including Rolls-Royce with its Canadian-designed and manufactured Mission Bay Handling System that will enable adaptability for the ships’ operations.

To meet the distinctive mission requirements of the Royal Canadian Navy, the Canadian Type 26 is enhanced with the team’s collective Canadian naval expertise in combat system design, integration, training, logistics and program management. Designed for high-end anti-submarine warfare and capable of performing a variety of missions around the world, the Type 26 is acoustically quiet, versatile, highly survivable, and allows for significant growth margins for future modernization.

Canada’s Combat Ship Team says it will deliver lasting economic benefits to Canadian industry through $17 billion in value proposition commitments in innovation across Canada’s priority areas, including $2 billion in supplier development, $2 billion in research and development, and $200 million in advanced manufacturing.