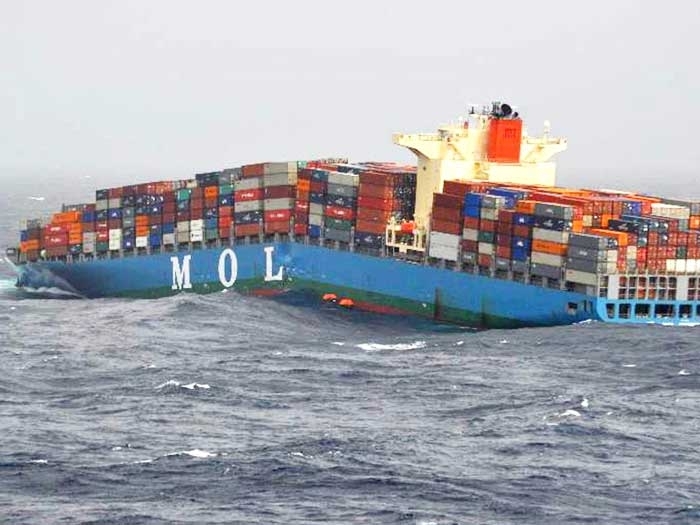 DECEMBER 20, 2013 — A committee established by Japan’s Ministry of Land, Infrastructure, Transport and Tourism (MLIT) following the June 17 loss of the containership MOL Comfort has completed its interim report on the casualty and made excerpts available in English.

Among other things, the interim report reveals that the estimated load on the ship at the time of the accident equated to only approximately 67% of the hull strength. The committee says it is still in the process of extrapolating the accident scenario and developing upon safety measures.

In the meantime, it is recommending that the following actions be carried out on ships with loading capacities similar to or greater than 8,000 TEU class as temporary safety measures.

FINDINGS
The interim report says that MOL Comfort experienced hogging (convex deformations in the longitudinal direction), causing the midship to fracture. According to observation of the progression following the outbreak of the accident, the upper deck area was the last part to fracture. From this, it can be assumed that the crack which trigged the fracture began below the waterline in the bottom part of the ship’s hull and then progressed upwards along the side of the ship. The fracture is believed to have originated in the bottom shell plates of No. 6 Cargo Hold.

Safety inspections of the ship’s sister ships have found buckling deformations (for example, measuring approximately 20 mm in height) on the bottom shell plates.

An investigation of MOL Comfort’s maintenance and inspections records also found buckling deformations on the bottom shell plates of the No. 5 Cargo Hold forward of the presumed fracture point.

Structural analyses (simulations) were carried out to simulate the fracture of the ship. Meanwhile wave-load analyses under the sea state condition at the time of the accident were also carried out.

Structural simulations were also conducted to simulate the buckling deformations (approx. 20 mm) found on the bottom shell plates during the safety inspections of the sister ships, but such buckling deformations did not occur even when applying loads near the ultimate hull girder strength.

Uncertain factors, in the estimation of structural strength such as the possible presence of residual deformations approximately 20 mm in height on the bottom shell plates along the butt joint of the ship bottom (the welded areas between the blocks in which the hull was built) were quantitatively assessed. Furthermore, the cargo loading effect on the simulations of acting loads were quantitatively assessed. However, the conditions for fracture were not able to be simulated.

The load acting on the ship under the sea state at the time of the accident is estimated by the Committee to be 9.4 x 106 kN-m. However, according to the navigation records, the ship had encountered sea states in which it withstood a load of approximately 10.0 x 106 kN-m around three and a half years prior to
the accident, and no such fracturing accident had occurred in that instance. Since the fracturing accident
occurred after this event, three possibilities are hypothesizedt:

(1) the real loads acting on the hull at the time of the accident exceeded the estimation;
(2) the ship’s hull strength had been reduced due to possible presence of residual buckling deformations
on the bottom shell plates or any other reasons; or
(3) both of the above elements were combined.

For this reason,says the interim report, it is necessary to conduct further verification of both load and strength related simulations, including consideration of the effect of the uncertain factors in the simulations.

Furthermore, with regards to the fact that deformations of approximately 20 mm were found on the bottom shell plates during the safety inspections of the sister ships, given that the deformations could not be simulated even when loads very close to the ultimate hull girder strength were applied, and that some buckling deformations of the bottom shell plates of the ship had been found even though she is presumed not have encountered loads close to her hull strength, it is necessary to clarify the mechanism of these buckling deformations by both full-scale stress measurements of actual ships and numerical simulations.

Further investigations including numerical simulations of the wave loads and the hull structure strength as well as full-scale stress measurements of sister ships will be carried out to clarify the cause of the accident and to establish safety measures to prevent the occurrence of similar accidents.

Furthermore, in order to determine the scope of ships for safety measures, numerical simulations of hull strength and acting loads, as well as full-scale stress measurements of actual ships will be carried out on large container ships with designs other than the Ship.