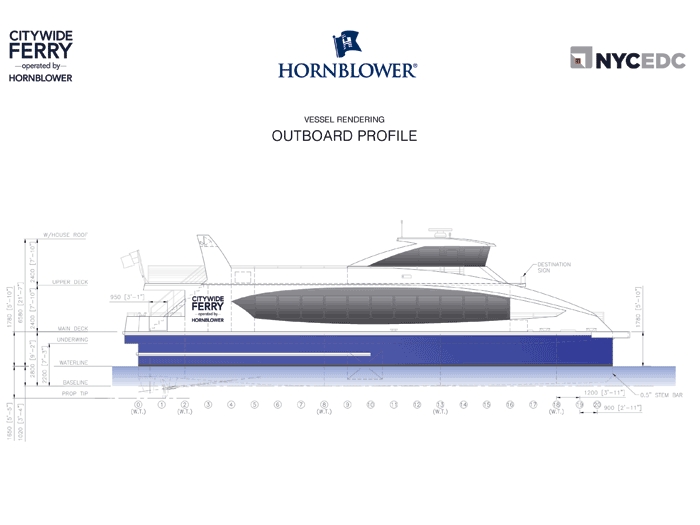 June 16, 2016 — New York City has released the initial renderings of the ferries for the new Citywide Ferry system that will start operating in the summer of next year. Hornblower, Inc., will operate the ferries under a contract with the city.

Designed by Incat Crowther, the new ferries will be 26 meters long, slightly larger than the standard 22 m vessels, providing passengers with a more comfortable ride. The ferries will also feature charging stations, concessions, Wi-Fi and a space for bicycles on board.

“The greatest city in the world deserves the greatest ferry system in the world. That’s exactly what New Yorkers are getting with these modern, efficient boats that come with Wi-Fi, charging stations, and plenty of space to move around comfortably,” said New York City Mayor Bill de Blasio. “Most importantly, when we launch Citywide Ferry next summer we will be connecting New Yorkers in transit-starved neighborhoods with good jobs and opportunities all over the city.”

Nineteen vessels will operate at 21 landing across four of New York City’s five boroughs, providing a new and easy transport for underserved communities, such as Clason Point in the Soundview section of the Bronx, and connecting people with the city’s hundreds of miles of waterfront.

Each vessel will use EPA-compliant Tier 3 engines to help reduce diesel emissions and noise. Incat Crowther’s innovative hull design will help limit wake and maximize fuel efficiency, and the ferries will primarily be built out of aluminum further increasing fuel efficiency.

Each member of Citywide Ferries’ fleet is expected to carry at least 149 passengers. The vessel’s main deck will have seating for 123 seats plus space for four wheelchairs and four strollers. Meanwhile, the upper deck will seat 42.

“Hornblower is working with leading designers and maritime experts to deliver a 21st century ferry product to New York Harbor that will make working, living and playing along the waterfront that much easier,” said Cameron Clark, VP and GM, Hornblower. “The overall concept of these new vessels reflects our design to deliver a system that builds on our strong record of environmental efficiency, sustainability and resiliency.”

Hornblower is no stranger to operating a fleet that is environmentally friendly, efficient and sustainable. The company currently operates the Hornblower Hybrid in New York Harbor. The operator’s west coast division, Alcatraz Cruises, operates the company’s environmental flagship, the Hornblower Hybrid Alcatraz, which uses solar panels, wind turbines and fuel-efficient diesel engines for power. The 64 ft ferry also incorporates the use of recycled and sustainable materials in its interior fixtures.